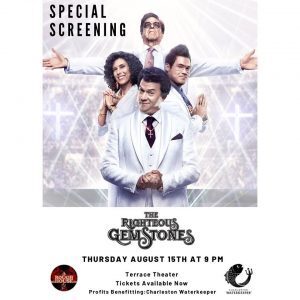 Rough House Pictures has announced they will host an early screening of HBO’s The Righteous Gemstones at the Terrace Theater on Thursday, August 15th at 9 pm. The event will benefit Charleston Waterkeeper.

The Righteous Gemstones, a new series starring Danny McBride, John Goodman, Adam DeVine, and Edi Patterson, will premiere at 10 pm on August 18th. The series was filmed throughout the Charleston area.


According to Variety, the show will tell the story of “the world famous Gemstone televangelist family, which has a long tradition of deviance, greed, and charitable work, all in the name of the Lord Jesus Christ.”

Rough House Pictures is a production company headed by Danny McBride, David Gordon Green, Jody Hill, and Brandon James. The company is behind series like “Vice Principals” and “Eastbound & Down.”