End of the World Tour Goes Out With Fire, Blood, Confetti, Sonic Booms, and Thunderous Applause 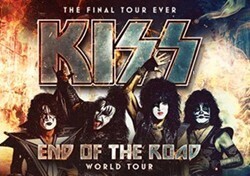 One of the loudest, and most enduring glam rock bands of all time blew the roof off the North Charleston Coliseum Thursday (Aug 8) night, as KISS brought their End of the Road World Tour to the low country. War paint, vintage costumes, pyrotechnics, spewing blood, elevated platforms, and screaming guitars were on full display. 46 years after they first popped onto the scene, the quartet fronted by founding members Gene Simmons and Paul Stanley proved they still have the raw energy and enthusiasm to wow concert goers, and the near sell out crowd ate it up.

Known for their indelible songs as well as their onstage theatrics KISS is among a few bands in the history of rock n’ roll that have survived through the many changes in the entertainment industry. The KISS Army have been with them since the mid 1970’s and it was apparent they were in full force at the North Charleston Coliseum. Simmons who turns 70 later this month, and Stanley who is 67 did not disappoint. Over 20 songs, many classic rock anthems echoed throughout the coliseum. Simply put, KISS still know how to rock n’ roll all night!

Performance artist slash painter David Garibaldi opened the concert, showcasing his experience to bring an empty canvas to life in just a matter of minutes. His ‘rhythm and hue’ color spectacular has helped raise much needed monies for various charities over the years, and bridge the gap between art and sound. With ACDC blaring from the speakers he re-created images of Angus Young, fashioning Slash of Guns n’ Roses in similar fashion. His final work of art paid tribute to the headlining act, declaring it was up for auction to help support causes KISS embrace.

KISS opened the show offering up music from another legendary band as they kicked off full throttle with Led Zeppelin’s ‘Rock n’ Roll’ as their lead in, with the guys cruising right into ‘Detroit Rock City’ as their first full-fledged number. The guys turned up the volume with ‘Shout It Out Loud’, as they were just settling in, thanking fans of all ages for keeping their dream alive.

Simmons and Stanley took audience members back to the beginning, offering up ‘Deuce’, a familiar track from their self titled 1974 debut album. The Army, and those hoping to witness one of rock music’s powerhouses before they ride off into sunset went wild. KISS went fast forward with their follow up song, bringing the audience to 2009 with ‘Say Yeah‘ a hard hitting power ballad from ‘Sonic Boom’. 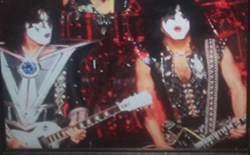 With four decades of decadence to draw upon, KISS are comfortable travelling throughout the decades. Simmons took over the vocals on 1982’s ‘I Love It Loud‘, a rare track from ‘Creatures of the Night’, the last video the band recorded before unmasking themselves in 1983. It was a nice segue way into ‘Heaven’s On Fire‘ which incidentally was the first single (1984) during their non-makeup era. With or without their face paint, KISS know how to rock an arena.

KISS faithful knew what to expect as the guitar sounds of ‘War Machine’ rattled the coliseum. With Simmons once again at the mike, the crowd could feel the heat as the stage was set ablaze multiple times, with Simmons culminating the number with his timeless side show, thrill seeking, fire breathing dragon exploits. There’s no telling how much combustible liquid Simmons has inhaled over the years, but the spectacle never fails to amaze avid concert goers and first timers.

Gene and Paul continued to pay tribute to the 1980’s with the crowd favorite and the title track from ‘Lick It Up’, their first MTV video without makeup. Once again the band saluted some of their heroes extending ‘Lick It Up’ with The Who’s ‘Won’t Get Fooled Again’, giving classic rock fans and extra measure of KISS appreciation for their decades of support. ‘Calling Dr. Love’ continued the madness, mayhem, and crowd sing-along.  Although they only had six songs grace the American Top 40 charts, KISS have sold over 100 millions albums worldwide, and diehard fans no the words to familiar radio favorites and obscure album cuts.

Longtime members Eric Singer and Tommy Thayer got their due with drum and guitar solos on ‘100,000 Years’ and ‘Cold Gin’ respectively. Singer has been in and out of the band since 1991, filling down time alongside Brian May (Queen) and Alice Cooper. A former guitar player with the hard rock band ‘Black n’ Blue’ Thayer has been slinging his axe full time with KISS since 2002.

Simmons who is no doubt one of the most melodramatic bass players in rock n’ roll further enthralled his followers, spitting up blood during his signature lead vocal on ‘God Of Thunder‘, elevated high above the stage. The track from 1976’s ‘Destroyer’ album has become a must include song in every KISS live show, providing an extra measure of decadence to a band that helped propel glam and shock rock during it’s 70’s heyday, with Simmons as the ultimate dark hero.

With three oversized screens recapturing the glory days of KISS throughout the decades, the video images provided additional animation to a few of the obscure KISS numbers. While Simmons is the showman, Stanley remains the live crowd spokesperson for the band, thanking the Charleston audience multiple times for their support, since KISS first rocked the low country back in 1974.

After one of his appreciation speeches and declaration that KISS was a member of the Rock n’ Roll Hall of Fame, Stanley added the HOF had little regard for KISS, and it was the fans that earned their inclusion into the hallowed halls in Cleveland, Ohio. Without missing a beat, Stanley proclaimed the south had the most welcoming KISS audiences, asking concert attendees if he could join them in the crowd. After thousands shouted his name ‘Paul’ three times, he boarded a makeshift cable transport and made his way over the crowd.

More than half way through their show, ‘Psycho Circus‘ and “Let Me Go, Rock n’ Roll‘ were awesome lead-ins to Stanley’s solo time in the limelight, as the rhythm guitarist rocked ‘Love Gun’ from a smaller stage behind the sound booth near the rear of the auditorium. Aside from full screens on stage, many in the cheap seats appreciated seeing the guitar rock god up close.

Stanley remained on the secluded stage as KISS kept with the 70’s theme sending up ‘I Was Made For Loving You‘, making his way back to the main stage for ‘Black Diamond’ which further invigorated the Army. It was an awesome three song salute before the quartet exited the stage. A thunderous roar brought the band back on stage within minutes for a final send off.

Longtime fans and even newcomers anticipated the classic encore that would ensue. Singer alone found his way to the piano as the crowd went ballistic for KISS’ power ballad ‘Beth’, their biggest hit across the board. ‘Crazy Crazy Nights’ bridged the musical gap for the ultimate concert party song of all time, as thousands in the audience sang along to their signature song ‘Rock and Roll All Nite’.  The closing track was made even more epic with Simmons and Thayer perched high atop boom type lifts playing dueling guitar The track remains their biggest hit, reaching number 12 on the Billboard Pop Charts in 1976.

With non-stop fireworks, smoke, and confetti from cannons filling the coliseum, it was on hell of an awesome finale, and although it left fans wanting for more, they knew that if this was truly the last time KISS would play Charleston, at least the self proclaimed world’s best band went out with a bang.

While KISS was once again thanking fans for their years of support and making their final goodbyes, the audience got saluted by a recorded track of ‘God Gave Rock n’ Roll To You’, a rock anthem first recorded by British band ‘Argent’ with KISS covering the song in 1991. An epic goodbye to a Rock n’ Roll Hall of Fame band, who have put their fans first for 46 years. They very well may not grace the stage much longer but their music and their image will live on in rock n’ roll history.

Many fans came in costume, with many more travelling hundreds of miles to honor their rock gods. The band might be hanging up their signature look and platform shoes, but the KISS Army will live on, no doubt gaining a few new recruits after Thursday nights show. I spoke to a mother who attended with her nine year daughter, and met up with another grade school young man dressed in full KISS attire. To that I say long live ‘rock n’ roll’. KISS have now proudly ‘hard rocked’ three generations.

If you missed this one, I suggest you hit the road while they still rock America and Canada for the next couple of months, before dates overseas including date in Australia and Japan. World tour for sure, absolutely!

“Head Over Heels”: A Madcap Sexually-Infused Comedy at Footlight