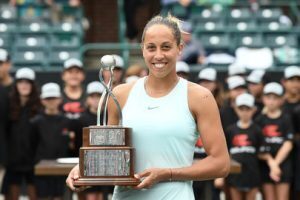 After winning the 2019 Volvo Car Open in April, Madison Keys (right) has committed to defending her title in 2020. Next year’s event will be Keys’ eighth consecutive Charleston tournament. The 2020 Volvo Car Open will take place April 4th to 12th on Daniel Island.

“Madison’s win in Charleston this year was something our fans have been rooting for since she started competing in the Volvo Car Open in 2013,” Eleanor Adams, Volvo Car Open Tournament Manager, said. “Her personality shines when she plays and our fans have loved watching her grow up on our courts. We’re ecstatic that she’ll be back in 2020 to defend her well-deserved title.”

Her 2019 season also includes a quarterfinal appearance at the French Open and fourth round berth at the Australian Open. In addition, she was a member of the US Fed Cup team. The 24-year-old has remained in the WTA’s top 20 for the past five seasons.

“Winning the Volvo Car Open after coming so close in the past was the most amazing feeling,” Keys said. “Charleston has always been one of my favorite tournaments and being able to win the title was such a special moment. I’m excited to come back next year to play in front of the best fans around.”

Keys was awarded a key to the City of Charleston by Charleston Mayor John Tecklenburg during the singles final trophy presentation. The Volvo Car Open also honored her with the 2019 Player Who Makes A Difference award for her work with the anti-bullying nonprofit, Fearlessly Girl.

The Volvo Car Open will celebrate its 20th year in Charleston in 2020. The tournament relocated to Charleston from Hilton Head Island, where it was held from 1973 – 2000.The nine-day Volvo Car Open is the largest women’s-only tennis tournament in North America. The event attracts an average of 90,000 attendees and more than 100 of the top singles and doubles tennis players to Charleston every year.

Tickets for the 2020 Volvo Car Open will go on sale on Monday, September 9th.

For more information on the tournament and ticket options, visit volvocaropen.com or call 843-856-7900.

Study: SC Ranks Among the 15 States with the Most Underprivileged Children