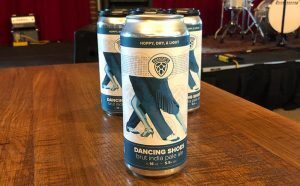 Dockery’s, the Daniel Island restaurant, brewery, and music venue, is proud to announce the release of their one hundredth unique beer, Dancing Shoes, a Brut India Pale Ale that will be served on tap in the restaurant and in cans for off-site consumption. Brewmaster Dustin Wilson, wanting to give back to the community in a special way, has named this series of IPAs ‘Shoes Are the Future,’ and is set to donate a percentage of profits from the beer and the release party to the Happy Feet program from the Mt. Pleasant and East Cooper Rotary Clubs.

The release party, to be held at Dockery’s on Saturday, August 17, 2019 from 2 pm to 6 pm, will feature live music, food specials, and most importantly, a can release for ‘Shoes Are the Future: Dancing Shoes.’ Four-packs of cans will be available for $14 each with a limit of two four-packs per guest.

The Happy Feet program from the Rotary Clubs provides new socks and shoes to children from twelve local school districts. Last year’s fund raising provided new shoes to 356 students from across the Charleston area. Wilson said that he chose this particular charity as a way of contributing to a direct need in the community.

“I’m the kind of person that wants to see the impact of what I’m doing, even if it’s just a small thing,” Wilson said. “We wanted to make a donation towards education in Charleston, but wanted to make it a personal gift, something that would mean a lot to each of the kids that were helped. When we saw the Happy Feet program, we knew we’d found the right way to help.”

The release party will be a family-friendly affair on the Dockery’s outdoor pavilion with live music from Sufferin’ Moses, food specials from the Dockery’s food truck by chef Todd Ladd, and more than 15 different Dockery’s beers to choose from.

For more information on the Dockery’s beer program, visit DockerysDI.com/beer. To give directly to the Happy Feet program, contact Lou Mello at loumello9@gmail.com, or attebd the release event where the Rotary Club will have a small booth to provide further information and accept donations.

Enrollment Open for After School Adventures at Wild Blue Ropes