In 2014 Tomi Lahren graduated from the University of Nevada, Las Vegas hoping to intern at right wing television news outlet, One America News Network (OANN) in San Diego. A bizarre turn of events lead her to host her own show, and a conservative media star was set in motion.

A short stay at The Blaze (amid controversy) and the advocacy group Great American Alliance, provided additional visibility, with Lahren making her way to Fox News, and their subscription streaming service Fox Nation, as the host of her own show. The bright, fast talking, blonde haired female has quickly become the voice for conservative millennials, and the coming of age Gen Z crowd. Her ‘First Thoughts’ talk show is one of Fox Nation’s hottest commodities.

To what does the 26 year old (Lahren turns 27 on August 11th) attribute for her meteoric rise in short fashion. “A lot of it has to do with my coming of age, and being in the right place at the right time. We live in a very viral world, and being on social media has benefitted me. I’ve always been very determined and outspoken. So to those who thought I wouldn’t make it, I tried twice as hard to prove them wrong.”

While many young people in their mid 20’s are still finding themselves, milking college, living at home, seeking cry rooms, hiding behind Antifa masks, and following democratic pied pipers, the fierce and determined Lahren, is busy blazing new trails for young, open-minded conservatives. A self proclaimed vlogger (video blogger) and political analyst Lahren is quick to note she is not a news journalist, rather she is an informed commentator.

“I don’t report on the news. That’s not that exciting to me. I take what happens in the news and analyze it, and add my opinions to them. I love a good debate and a good exchange of ideas. I believe it’s healthy to talk about what’s happening around us. Ideally I’d like to convert liberals to my way of thinking, but that’s not what I’m about. First I want us to have deep meaningful conversations, and hopefully the message I’m promoting will have an effect on them.”

It’s hard to imagine anyone who follows topical conversation from the 24 hour news channels hasn’t heard of Lahren. For the few that do, she offers a quick synopsis. “I’m fiercely patriotic and un-apologetic. I love this country and the freedoms America provides. It doesn’t matter to me if I have haters as long as I stay true to who I am. I’m passionate and opinionated. I love commentary. I love writing, and I’m a pundit. That’s me, pure and simple.”

A lot like fellow Fox Nation personality Tyrus, Lahren is hell bent on dispelling the stereotype all conservatives come in the same package. She loves her program on Fox but is the first to admit she can’t be pigeon holed. “What I do doesn’t fit in a box. I’m a little different, but that is allowed on Fox Nation so that’s why I’ve found a home there.”

Lahren has dealt with her fair share of abuse and backlash from liberals who don’t see eye to eye with her. One incident in Minnesota was particularly troubling because she was out with her parents, simply enjoying a Sunday brunch. Lahren was harassed, bombarded with obscenities, and pummeled with a water glass. “You can disagree with me all day long, but there is no reason for hostility or abuse just because you don’t like what I have to say.” Lahren adds she will have a civil discourse with anyone but sees no need for conflict because both parties have different viewpoints.

Tomi Lahren may just be the most the highly publicized overly opinionated ‘girl next door’ in America. Raised in ‘Gateway of the Black Hills’ aka Rapid City, South Dakota (home to Mt. Rushmore), she comes from a working class family with traditional values. It’s her blue collars roots that brought about her feistiness.

“Honestly, I was just born this way. I’ve always been a spitfire. It started when I was very young. I’ve always stood up for myself and had a voice. Growing up in middle America gave me a strong backbone. I understand the working class, the farmer, the trucker, the factory worker. My parents (Kevin & Trudy) were just regular blue collar people. Where I grew up people never wanted a handout. They just wanted to work and were proud to be Americans.” 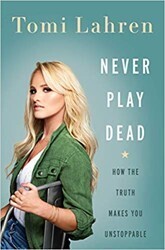 It appears Lahren has the ‘midas touch’. Her new book (her first) is titled ‘Never Play Dead : How The Truth Makes You Unstoppable’. “What motivated me to write the book initially was when I was fired from ‘The Blaze’. I could have just rolled over and played dead, collected a check for doing nothing. But that’s not me. First off, if I’m going to get paid, I’m going to earn my pay.”

Lahren goes on to say about the new book, “In some ways the book is political, but also it’s very personal. I open up about my life and all that’s happened to me over the past few years.”

In ‘Never Play Dead’ Lahren stays close to an underlying theme. She doesn’t want people to think like her, but rather just think. “A lot of what happens in the world or right here in America is reactionary. People react not knowing the facts, not getting to the truth of the matter. I don’t want people to necessarily think like me, I just want them to be informed.”

A staunch republican and Trump supporter, Lahren admits it’s not high profile personalities who motivate her. “Certainly not heads of state. There are a few politicians out there that inspire me, or at least what they are trying to do. But for the most part I’m inspired by my family, forgotten America, our military, and law enforcement officers. I speak for the average American because that is where I come from.”

She admits it’s easy for young minds to be led astray. “We live in a day and time where everything is instant. Oftentimes our reactions are just as quick. People need to dig deep and discover the truths before reacting. Sadly people will simply follow the lead of a celebrity like LeBron James or Kim Kardashian, and not even look for the truth. I’m saying, dig a little deeper and discover the truth, and it will make you unstoppable.”

Lahren doubled majored in journalism and political science which gives her a degree of credibility. With her education and national television visibility, what would she impart to people her own age. “In my book I say, don’t be afraid. Stand up for yourself. Don’t let the liberals be the only voice heard in the crowd.”

She adds, “People always know where I stand. I’m confident. I talk about issues that sometimes make people uncomfortable. But we need to have these conversations. Also social media can be both good and bad. It’s easy to hide behind tweets or posts. Get out and join the conversation in the real world. Make a difference.”

Just shy of turning 27 Lahren may have many years left on God’s green planet, but mainly focuses on today. “I used to think in five year plans, but that makes God laugh. I recently got engaged, so I’ll no doubt be planning a wedding. Aside from that I keep my head down and my eyes up. I want to help make positive changes in our country, so it’s important to me to stay focused all the time.”

Regarding her pending 2020 nuptials, don’t be surprised if you witness a low country Lahren sighting prior to the ceremony. “I’ve always wanted to come to Charleston. I might very well bring my bachelorette party to Charleston”.

Tomi Lahren is a rising star in the world of calculated pundits and over-rated political news commentators. She’s young, confident, and not your average run of the mill ‘Barbie Doll’ voice crying in the wilderness. “I’m a little old school. I say what I mean, and I mean what I say.”

The overall message in her book reflects the same. “I’m not trying to hurt anyone. I’m just being who I am. It’s obvious we’re not all going to agree on everything, but we need to re-evaluate how we treat people. It’s okay to speak your mind, and always remember not to let haters get you down. It’s not worth your time.” Teeming among the 233 pages are insightful reminders to work hard, respect yourself, trust God’s plan, and for the ladies, value your worth in society and the workplace.

Published by Harper Collins, ‘Never Play Dead : How The Truth Makes You Unstoppable’ is available at most book stores and online. You can get a copy by visiting Harper Collins at https://www.harpercollins.com/9780062881953/never-play-dead/