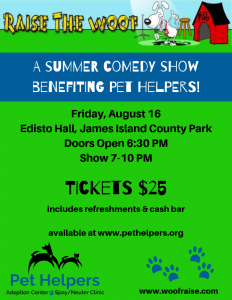 On Friday, August 16th, from 7 pm to 10 pm, Pet Helpers will present “Raise the Woof,” a stand-up comedy show, taking place at Edisto Hall in the James Island County Park. A part of the proceeds from this event will directly benefit Pet Helpers.


The headlining comedian for this event will be Sid Davis, who has opened for Joan Rivers and performed all around the United States and Canada.

Doors for the show will open at 6:30 pm. Tickets are $25 and can be purchased on the Pet Helpers Website: www.pethelpers.org. Tickets include access to a cash bar.

Pet Helpers’ is a 501(c)3 Adoption Center and Spay/Neuter Clinic that serves communities across the Lowcountry. Their mission is to end the euthanasia of all adoptable cats and dogs by keeping all animals until adopted; providing low cost spay/neuter surgeries; offering humane education programs; pursuing animal-cruelty prosecution; and initiating animal-welfare legislation.