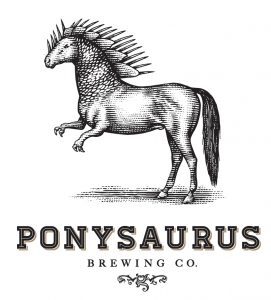 Ponysaurus Brewing Co., a North Carolina based brewery, and EOBC created “Of Dinosaurs and Horses” in celebration of each brewery’s expansion into the other’s home state.

“We describe our brewing methods as forward-thinking and backward-tasting, focusing on making classic styles the best they can be,” Nick Hawthorne-Johnson, co-owner of Ponysaurus Brewing Co., said. “Collaborations throw us into another world of possibilities, and ‘Of Dinosaurs and Horses’ is a perfect example of pursuing a flavor complexity that wouldn’t normally be in our typical cast of characters.”

The Ponysaurus Brewing Co. team is returning to Charleston from September 13th to 15th for a series of events, which includes tap takeovers at The Bar at Husk and Martin’s Bar-B-Que, a Don’t Be Mean to People show hosted at The Royal American, and a private party hosted by Leon’s Oyster Shed with James Beard Award Winner Jason Stanhope, the executive chef of FIG, and Joe Kwon of The Avett Brothers.

Further details can be found on Ponysaurus Brewing Co.’ s website at www.ponysaurusbrewing.com/south-carolina and on social media.