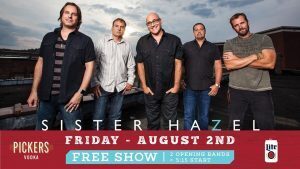 Red’s will offer several drink specials during the event:

Sister Hazel kicked off the year with the release of their newest six-track EP, Fire. The album is the third volume of their collectible compilation series titled “Elements.” Fire, which debuted at #5 on the Billboard Independent Albums chart, can be purchased here and is also on all streaming services.

Originating from Gainesville, FL, Sister Hazel is best known for their song “All for You,” which topped the adult alternative charts during the summer of 1997. The success of that single propelled their album (…Somewhere More Familiar) to platinum status.