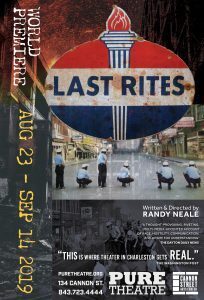 On August 23, 2019, PURE Theatre’s 17th Season will officially kick off with the world premiere of Last Rites by Randy Neale; a play that considers both the spark that ignited the violence of the Detroit Riots in 1967 and the embers that still burn amid the ashes today.

A finalist in the Blue Ink Festival at the American Blues Theatre in Chicago and at FutureFest at the Dayton Playhouse, Last Rites follows three strangers who take refuge from the chaos of the Detroit Riots. Tensions rise as the three consider the harsh nature of loss and the inevitable combustibility of their differences.

“In 2015, when I was retiring as a teacher and a coach at Charleston Collegiate school, I was honored to address the graduating class,” says LAST RITES Playwright and Director, Randy Neale. “The school was very diverse and that class was particularly so, basically equal numbers of African-American, Latino, Chinese, and White students. As I was talking to the graduates, I was struck by the same thought that I had every year: that the future that I was talking to them about would be radically different for most of them based on the color of their skin. All of these students were equally bright, engaging, personable, and 100% of them had been accepted to four-year colleges but most of these great kids were heading into adulthood with the odds for a successful life already stacked against them. This thought brought me back to my own high school graduation in Detroit in 1967 and the riots which dominated that summer and changed that city forever. And I thought about why, in matters of race, so little had changed in 50 years. So, I began writing this story that I had been thinking about for those fifty years with the hope that, by examining the conditions and the mistakes of the past, we might be moved to try to change the future. The rhetoric and actions of the present day compel us to make these changes before we have allowed racism to destroy us.”

Following its opening, the production will run for four weeks through September 14, 2019 at the Cannon Street Arts Center (134 Cannon Street). Regular performance times are Wednesday through Saturday at 7:30 pm with a matinee performance at 3:00 pm on Saturday, September 7. Last Rites will also return for one night only on October 2 during the 2019 MOJA Arts Festival. Tickets for the MOJA Festival will be available early Fall 2019.

Tickets for the regular run of Last Rites are on sale now at puretheatre.org and at the PURE Theatre box office and range from $10-$35. Advance purchases are strongly recommended. In an effort to make attendance as accessible as possible, PURE will offer a number of opportunities for accessible ticket rates throughout the run, including two Pay-What-You-Will performances on Thursday, August 22 and Wednesday, August 28 at 7:30 pm. The regular $15 student ticket rate and a limited number of first-come-first-serve $10 tickets (limit two per purchase) will also be available at each performance.

Additional information about LAST RITES can be found on PURE’s website at puretheatre.org or by calling the box office at 843.723.4444 Tuesday through Friday 10:00 am – 6:00 pm and two hours prior to curtain on performance days. PURE Theatre is now located at 134 Cannon Street.

Dog & Duck Golf Tournament Raises $32,000 for I GOT LEGS and Sydney Fowler Fund