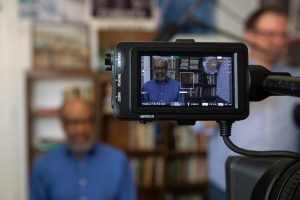 The architectural beauty of the College of Charleston campus has long been a defining and celebrated feature of the university. But the full story of how many campus buildings came to be is not widely known.

A committee of College of Charleston faculty and staff hope to change that with a new documentary project titled If These Walls Could Talk. Birthed from a campus diversity workshop held in fall 2018, the documentary centers on how enslaved Africans contributed to the construction of College buildings and surrounding sites.

Charissa Owens, director of diversity education and training in the Office of Institutional Diversity and the project’s leader, says the documentary will be the first in a series of films that will be used as part of diversity training on campus.

“This documentary is the first in CofC’s diversity docuseries that will take viewers on a transformative journey with reflective questions prompting them to discover, embrace and positively respond to the College of Charleston’s pluralistic history,” says Owens. “We are intentionally building a bridge for healthy reconciliation efforts by producing a film series that captures the narratives of marginalized individuals who contributed to the first municipal college in the United States.”

If These Walls Could Talk is slated for release in spring 2020. And while production of the full documentary continues, a promotional trailer is now available for viewing. You can see it below.

Michael T. Owens, adjunct professor of English, is the documentary’s writer and director. Owens says the film’s narrative structure unfolded naturally as he posed a series of questions to members of the campus community.

“To gain a variety of perspectives for the film, we sought to interview College of Charleston faculty, staff, students and surrounding community members. Although we had a rough narrative framework in mind, we ultimately let the story develop organically,” he says. “I found a general consensus of individuals wanting the College to acknowledge and memorialize in a visible, meaningful, and lasting way, the contributions enslaved Africans made to our campus. People seemed tired of simply talking about this issue and were passionately ready for action.”

Barry Stiefel, associate professor of historic preservation at the College, has worked with undergraduate and graduate students to conduct research on the history of brickmaking and enslaved labor in Charleston, and some of their findings will help inform the documentary.

Old bricks used in many of Charleston’s historic structures retain physical evidence of the enslaved people who constructed the city’s buildings. Stiefel says the fingerprints left behind on some bricks serve as powerful reminders of the people responsible for creating such grand structures.

“In my office is a half-broken brick, where in the middle sits a sacred conch shell that rests within a cavity purposely formed by its maker,” says Stiefel. “This brick was made in Charleston and dates from the antebellum period. When you remove the shell, one can see the fingerprints, the signature of the unlettered laborer, leaving us a message that they ‘were here.’ An enslaved person made ‘this’ and the structure it was used for.”

The timing of the documentary project aligns well with the upcoming celebration in 2020 of the 250th anniversary of the College’s founding, says Owens. In addition to the documentary, several other College projects surrounding the anniversary are examining the College’s past in an effort to acknowledge groups and communities that have made significant contributions to the College throughout its history.

In his first speech to the campus community in January 2019, President Andrew T. Hsu said that the College’s anniversary should also be a time for self-reflection about its past.

“Our yearlong 250th anniversary commemoration and celebration provide us with an opportunity to review our history and to develop an ambitious plan for the future. Of course, we need to acknowledge our history in full – the uplifting moments along with the disappointing ones,” Hsu said in his remarks. “The history of our university runs alongside of our country. From having three signers of the Declaration of Independence and three signers of the Constitution as founders, to the institution’s reliance on enslaved labor to construct some of its first campus buildings, our earliest moments share both great pride and great pain.”

Charissa Owens says she hopes the documentary will help serve as a catalyst in this process of introspection.

“As we come upon the sestercentennial celebration of the college’s 250 years of achievements, If These Walls Could Talk urges members of the College of Charleston community to reflect on the College’s role in racial reconciliation and in transforming our campus community into a more inclusive living, learning and working environment where everyone is valued.”
–

Follow us
Related Topics:college of charlestonIf These Walls Could Talk
Up Next