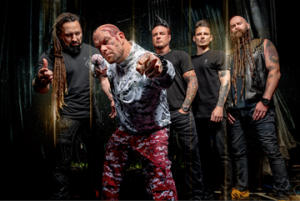 Currently on the road this July for a mini-series of summer shows and festival dates, Five Finger Death Punch have announced the launch of a Fall arena headlining tour that will stop at the North Charleston Coliseum on Saturday, November 30th. The tour will also stop at the Colonial Life Arena in Columbia on November 20th.

Since 2003, Five Finger Death Punch has staked a spot amongst the hard rock vanguard, quietly breaking records, toppling charts, moving millions of units worldwide, and making history by holding the all-time record for “most #1 singles at Active Rock Radio ever” with 14. In 2019, the group also surpassed 3 billion streams worldwide.

Five Finger Death Punch will donate a portion from every ticket sold on the tour to the GARY SINISE FOUNDATION, which honors America’s defenders, veterans, first responders, their families and those in need.
–

“A Christmas Carol” Coming to the Gaillard Center on December 18th