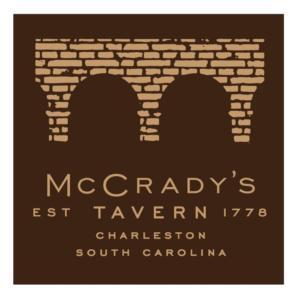 The Neighborhood Dining Group (NDG) today announced that McCrady’s Tavern will close at the end of the month. The owners of the property are selling the building located at 2 Unity Alley in downtown Charleston.

“It’s been a privilege to operate McCrady’s Tavern in this space for the past three years, and I would like to share my heartfelt thanks and gratitude to every member of our Tavern team and to each guest who walked down Unity Alley to dine with us,” David Howard, President of The Neighborhood Dining Group, said.

The adjacent McCrady’s, located at 155 East Bay Street, will continue operations as normal. The tasting-menu-only restaurant, operated by NDG since 2006, holds a AAA Five-Diamond Restaurant distinction and was named one of Wine Enthusiast’s 100 Best Wine Restaurants in America.

“While it’s bittersweet to close the doors of McCrady’s Tavern, we’ll continue offering the city’s finest food, beverages, and hospitality at McCrady’s,” NDG Vice President Kenny Lyons said. “Looking to the future, we’re excited to continue growing The Neighborhood Dining Group with the addition of Delaney Oyster House, a seafood restaurant and raw bar set to open on Calhoun Street in Charleston later this summer.”

The last day of service at McCrady’s Tavern will be Wednesday, July 31st.  According to NDG, staff members will be offered positions in the other restaurants managed by the company in Charleston and across the Southeast.

Charleston Confirmed as Official Finish City of The Transat 2020