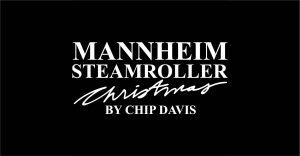 Do you remember the first time you heard “Mannheim Steamroller Christmas”?  Join the celebration as Mannheim Steamroller makes history again – Celebrating 35 years of holiday magic as they bring their annual holiday tour to fans throughout the country. The group will perform live for one night only at the Charleston Gaillard Center on November 26, 2019.

Experience the performance of the #1 Christmas music artist in history and for the first time ever, hear the entire album that started it all, LIVE – “Mannheim Steamroller Christmas!”

This fall, Chip Davis, founder and creator of Mannheim Steamroller, will celebrate the 35th Anniversary of his annual Christmas concert tour, making it the longest running consecutive concert tour in the entertainment industry!
Davis’ hallmark tour will begin on November 11th, 2019 and run through December 29th, 2019. Two traveling ensembles will hold performances in cities across the country.

“I remember when I came out with my first Christmas album in 1984 followed by our first tour.  Back then, many in the music industry said focusing on Christmas just wouldn’t work,” said Davis.

“Now, 35 years later, we are still going strong. I want to thank our fans for making us part of their holiday tradition. Today we often see multi-generational families join us during the holidays each year.”

Davis founded his own record label, American Gramaphone, which went on to become one of the industry’s largest independent record labels. A Grammy Award winner, Mannheim Steamroller has sold more than 40 million albums, 29 million in the Christmas genre.  Their holiday CD’s have become synonymous with Christmas and occupy top positions on Billboard’s Seasonal Chart every year.

This year’s show will feature all of your favorite original classic Christmas hits from the first Mannheim Steamroller Christmas album, along with multimedia effects in an intimate setting.  Davis will direct and co-produce Tour performances with MagicSpace Entertainment.
–
Tickets on sale Friday, July 26th at 10 am. Prices range from $49.50-$89.50 (plus applicable fees). Get pre-sale access by becoming a Charleston Gaillard Center Member. Contact our Development Office at development@gaillardcenter.org or (843) 579-6468 for more information.