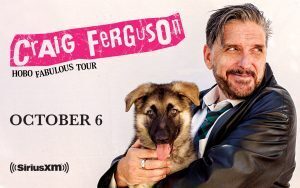 The Charleston Music Hall this week announced that comedian Craig Ferguson, the former host of “The Late Late Show” on CBS, will perform at the venue on Sunday, October 6th at 7:30 pm. Tickets for his “Hobo Fabulous Tour” go on-sale this Friday, July 19th at 10 am.

Ferguson is an Emmy Award-winning actor, writer, and comedian with a diverse career that encompasses film, television, and the stage.

Back in May, Ferguson released his third book, Riding the Elephant: A Memoir of Altercations, Humiliations, Hallucinations, and Observations, and he recently completed filming the movie Love Me to Death alongside Kathie Lee Gifford, who wrote the film.

As the host of “Celebrity Name Game,” Ferguson was awarded the Daytime Emmy for Outstanding Game Show Host two years in a row and was nominated for a third. Last year, Ferguson concluded his popular daily SiriusXM program “The Craig Ferguson Show.”

In 2014, Ferguson concluded his ten-year run as the host of CBS’ The Late Late Show with Craig Ferguson, which had set all-time viewer records and earned him a Primetime Emmy nomination and the 2009 Peabody Award for Excellence in Broadcasting for his interview with Archbishop Desmond Tutu.

To purchase tickets for the Charleston show, click here.

Charleston Confirmed as Official Finish City of The Transat 2020