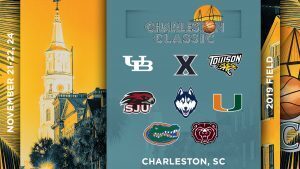 ESPN Events has revealed the bracket for the 12th annual Charleston Classic, to be played Nov. 21, 22 & 24 at TD Arena in Charleston. The field is highlighted by Florida and Xavier, who appear in ESPN.com’s latest “Way Too Early” Top 25 poll: Florida at No. 4 and Xavier at No. 20. The tournament will also feature nine of top 100 incoming freshman as ranked in the ESPN 100.

The Gators and Musketeers will be joined by returning MAC champion Buffalo, UConn, Miami, Missouri State, Saint Joseph’s, and Towson. Miami took home the Charleston Classic title in both of their previous appearances in 2009 and 2014.

The bracket-format tournament features 12 games over three days. The teams compete once per day, regardless of results. The two unbeaten teams will face off in a championship game at 8:30 pm on Sunday, Nov. 24. That game will be televised on ESPN for the first time, having aired on ESPN2 or ESPNU in previous years. 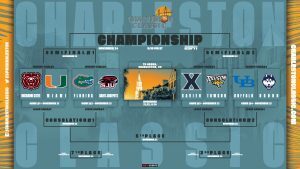 Single-session tickets will go on sale in October, pending availability. Fans are encouraged to purchase tickets in advance as Premium Lower Sideline tickets have sold out before October the past two years.Tickets are available at www.CharlestonClassic.com or by calling the College of Charleston box office at (843) 953-2632.

Fans traveling from out of town can discounted hotel rates at the tournament’s official fan hotel, Hyatt Place/House Historic District, by going to www.anthonytravel.com/charleston-classic.