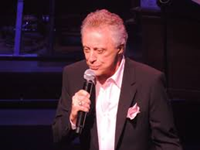 He has one of the most recognizable voices in the world of pop and rock music. His legacy began more than 65 years ago, and at 85 Frankie Valli has utilized his high tenor and falsetto voice to entertain audiences who still recall the glory days, when the suave and debonair Valli fronted The Four Seasons.

In their heyday The Four Seasons were one of a few groups that could rival The Beatles in the 1960’s. Prior to the British Invasion The Four Seasons saw their first four singles top the charts, including their debut release ‘Sherry’, followed by ‘Big Girls Don’t Cry’, ‘Walk Like A Man’, and ‘Candy Girl’.

The group survived several member changes with Valli and principle songwriter Bob Gaudio the two mainstays. By the time their chart dominance was over The Four Seasons scored 29 singles inside the Top 40 including ‘Let’s Hang On’, ‘Working My Way Back To You’, ‘Can’t Take My Eyes Off You’, and ‘December 1963 What A Night’, with Valli adding a string of solo successes, taking ‘My Eyes Adored You’ and the title track to the 1978 film ‘Grease’ to number one.

The original quartet including Nick Massi and Tommy DeVito would be inducted into the Rock N’ Roll Hall of Fame in 1990, and the Vocal Group Hall of Fame in 1999. The Four Seasons celebrated a resurgence in the 21st century after the 2005 Broadway debut of ‘Jersey Boys’, a hit musical chronicling the rags to riches rise of the Italian boys from the Garden State. Clint Eastwood’s 2014 film adaptation only added to the groups interest. 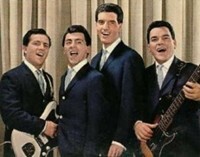 With all the hoopla surrounding The Four Seasons, Valli at 85 years young tours the country fronting Frankie Valli and The Four Seasons. He may not keep as full a schedule as he did in the past, but says he’d doing what he loves best. “Some people like to play golf in their retirement, some play tennis. I can’t imagine retiring. This is what I want to do forever. I’m not doing as many dates as I once did but I’m still very actively on the road. I love every minute of it.”

Valli is the first to admit he’s not lead a perfect life, but agrees growing up in New Jersey helped build and personify his character over the years. “I don’t know what’s in that water in Jersey, but it certainly gave me all that I needed to be a success in life. Think of all the great musicians that came out of Jersey, Sinatra, Springsteen, Dionne Warwick. We all learned a lot about perseverance from being from the Garden State.” He adds, “What do they say… Jersey strong!”

While ‘Jersey Boys’ is near accurate, Valli says it provides only a glimpse of the groups historic rise to stardom. “Well you have to understand some of it was sometimes more or less dramatic for the effect of the stage or screen. One thing I will tell you, nothing will ever compare to the real life story of all those years. It’s impossible to capture everything in two hours. My real life is far more extensive than what was shown.”

The musical and the film have broadened his appeal. “Most definitely. Lots of fans come to the show with their entire families. When I run into them they tell me how much they enjoyed not only the stage production but the movie. Always nice to hear but it’s so great to have them at the shows. Now when I’m on stage I’m not just asking if the audience has seen Jersey Boys….but how many times they have seen it!”

Over his six decade career Valli has seen a myriad of changes in the music business, with some coming full circle. “The long play (LP) album, where you get to open the record read the liner notes, with thankyous,, etc.  There’s nothing like holding an album in your hand. I believe most music now is sold digitally, although the kids now are getting into vinyl which i think is so great.”

Included in a long career comes many highlights, but breaking out on his own is near the top of his list as personal achievements. “My solo career was amazing. I was able to prove to myself that I could hold my own, although I still maintain my partnership with Bob Gaudio. He’s a friend for life.” He and Gaudio keep in touch or a regular basis. “He’s my business partner and my best friend. We talk almost daily.”

Together the two along with Massi and DeVito defined a generation that helped solidify the baby boomer generation, with the songs continuing to be played on classic pop stations around the country. Valli explains the appeal. “Good music is always timeless. It’s about the melodies that stick in your head and lyrics with real meaning.”

Being enshrined in the Rock N’ Roll Hall of Fame only compliments what Valli believes. “This was a great honor. I still pinch myself when I think I’m in the company of such great artists.” Decades older than many of his contemporaries, what keeps the consummate entertainer going, “Delicious Italian food and a healthy attitude!” Sounds like a great recipe for life.

Low country fans have another opportunity to see Frankie Valli when he brings 2019 The Four Seasons show to the Gaillard Center on June 29th. This is Valli’s third tour stop to Charleston over the past five years. “The Holy City does hold a place in his heart. “Charleston is one of the most beautiful cities in the United States by far. It’s a jewel and I always enjoy my visits there.”