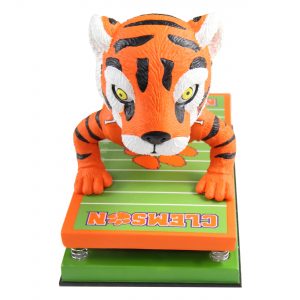 This morning, the National Bobblehead Hall of Fame and Museum unveiled an officially licensed, limited-edition bobblehead commemorating the Clemson Tigers pushup tradition. The bobblehead features Clemson’s mascot, The Tiger, doing a pushup to celebrate a touchdown on top of a football field base, which also bobbles. The pushup tradition, which started at Clemson, has been emulated by dozens of other college mascots across the country.

The limited edition bobbleheads, which are individually numbered to only 1,000, are in stock and ship now as fans prepare for the start of the 2019 football season in which Clemson will look to defend its National Championship. The bobbleheads are $40 each with a flat rate shipping charge of $8 per order and were produced exclusively for the National Bobblehead Hall of Fame and Museum by FOCO.

Pushups by The Tiger following Clemson football scoring plays started in 1978 when Clemson mascot Zach Mills began doing push-ups equal to the number of points Clemson had in the game. Mills’ outstanding record of 287 pushups in a game was later beat by Ricky Capps, who performed 465 pushups in a single game against Wake Forest in 1981. Clemson even keeps detailed records of its mascots and pushup records. The tradition has been copied by other colleges all over the nation.

“Clemson fans love their team and bobbleheads, and we think this is the perfect bobblehead for fans to showcase their Clemson pride,” said Phil Sklar, Co-Founder and CEO of the National Bobblehead Hall of Fame and Museum. “Every Saturday, mascots at many of the top colleges do pushups after scoring plays, but it all started at Clemson and we think this bobblehead will be a fan favorite.”

About FOCO
FOCO is a leading manufacturer of sports and entertainment merchandise celebrating more than 17 years in the industry. The company’s always-growing product lines includes apparel, accessories, toys, collectibles, novelty items, and more. FOCO is licensed with all major sports leagues including the NFL, MLB, NBA, NHL, NASCAR, MLS and over 100 colleges and universities as well as entertainment properties such as Disney, Warner Bros/DC Comics, Nickelodeon, and WWE. Please reach out to Matthew Katz, Licensing Manager, P 848-260-4315 – mkatz@foco.com for more information. Follow @FOCOusa on Facebook, Twitter, and Instagram for more exciting news and new product releases.