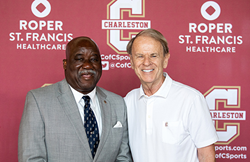 Like many great figures who have stood the test of time throughout the course of history, John Kresse and Otto German (’73) will remain icons of College of Charleston’s rich history.

The legendary head men’s basketball coach, who led the Cougars to four NCAA Tournament appearances, a 1983 NAIA National Championship title and560 wins during his 23-year coaching career from 1979 to 2002, Kresse will retire after 40 years of service to The College as head coach, administrator, fundraiser and program ambassador.

Meanwhile, German is in his 46th year of service at his alma mater and 50th overall counting his four years as a men’s basketball letter winner from 1970 to 1973. An all-conference selection in 1970, he was the second-ever African-American student-athlete to receive a full basketball scholarship at The College.

“It has been an honor and a privilege to work alongside Coach Kresse and Otto these past two years,” Director of Athletics Matt Roberts said. “The College of Charleston is a better place because of the positive and profound legacy they leave behind. We will be forever grateful of the indelible impact they have made on CofC student-athletes, staff and alumni for the last 40+ years.”

Many current and former administrators and staffers shared their memories of Kresse and German, who will retire at the end of the month and were honored at a retirement reception on Wednesday in the McAlister Hospitality Suite at TD Arena.

“They were bookends for the athletics program,” said Judge Alex Sanders, the 19th President of the College of Charleston from 1992 to 2001. “We were a nationally-successful program and never looked back. It wouldn’t have been successful without either one of them. They made it possible.”

Kresse and German thanked Sanders, their families and many others in attendance during their speeches.

“Congratulations to two legends on their retirement,” said Bobby Cremins, who worked alongside both during his time as head men’s basketball coach from 2006 to 2012. “I still won’t believe it until I come on campus and no longer see them in their offices. Their service to the College of Charleston is unparalleled. I cannot thank them both enough for their guidance and support while I coached there. They made the experience for our players and my staff so enjoyable.”

One long-time staff member who has known both men longer than anyone else is Jerry Baker (’74), former Director of Athletics from 1991 to 2007and current Executive Director of The Cougar Club. He and German, a Mt. Pleasant native, were both students on campus and worked one year together in the Stern Student Center during the 1977-78 school year. Baker was later hired in 1984 as an assistant athletics director by Kresse, who was then the athletics director.

“Otto German is a true gentleman and a truer friend,” Baker said. “Thank you also to Coach Kresse for giving me the opportunity to return to The College and letting me be a small part of so many victories.”

Known as ‘Giant Killers,’ those victories against the bigger schools inspired others in the athletics department to strive for the same excellence including head men’s soccer coach Ralph Lundy when CofC transitioned from NAIA to NCAA Division I status in 1991-92. Lundy would sit up high in the stands to watch Kresse’s practices in the old John Kresse Arena.

“What John showed me was courage to play the big boys,” Lundy said. “In the 1990s, we went to the NCAA Tournament (men’s soccer reached the NCAA quarterfinals in 1994) and did very well. I grew as a coach, because he said, ‘let’s play ’em.’ He is an absolute gentleman and was a tremendous coach.”

“Both John and Otto have had a huge impact on CofC Athletics,” said Anita Condon van de Erve (’70), former women’s basketball player from 1966to 1970 and Executive Director of The Cougar Club from 1987 to 2008. “It is impossible to say enough about John Kresse as a coach and leader, while Otto German contributed so much both on the court and in athletic administration.”

Life-long friendships were also formed with staffers in the athletics department. Director of Sports Medicine Chris Horschel (’01) said German would stop in the training room every day to check on him. Both would have conversations about work and life in general.

During her 25 years at the College of Charleston, administrative assistant Patricia “PC” Clark formed a strong bond with German which included weekly lunches to catch up on their families and grandchildren. Back in 1994, he was one of three people who interviewed her for the position of program assistant for all of the head coaches when they were housed in the F. Mitchell Johnson Physical Education Center on campus.

“Over the years, he has represented The College well with students and families who were interested in attending school here,” Clark said. “He always tried to help any student-athlete out when he could. He is one of my administrators, but one that became a confidant and friend, who helped me through some good times and bad times. I will miss seeing Germ for our daily morning catch-up talks, but know he is only a telephone call away. Have a great retirement my friend.”

Clark was also a program assistant to Kresse and had an office next to his in the Johnson Center. She watched the men’s basketball program soar through the Trans America Athletic Conference (TAAC), while putting The College on the map nationally. Clark recalls that when his teams played at Kresse Arena in the Johnson Center, the Cougars’ fan base was exciting with loud crowds that made it a hard place for opposing teams to play.

“Coach Kresse expected his players to be at their best on the court, in the classroom and as they traveled about representing the College o fCharleston,” she said. “I wish Coach and Mrs. (Sue Sommer) Kresse a wonderful and great retirement and hope that they enjoy spending time with their grandchildren.”

Alys Anne Wiedeke, former administrative assistant to the athletics director from 1993 to 2009, also shared fond memories of both and some of their daily routines. She recalled the 1,000 miles around The Battery everyday that Kresse must have walked during his time as head coach and German always being well dressed.

“I just think the world of both of them having worked with them for 16 years,” she said. “They were two of the most dedicated individuals to their careers and work. They were the kind of people I admire being around, because they love what they do. They are ‘true believers’ which is a very special quality these days. They truly believed in the goodness and value of what they do. They were alsosuch good role models for young people.”

Role models, leaders and trailblazers are some of the repeated descriptive words to describe Kresse’s and German’s time at The College.

“Others know him as a trailblazer, but I have always viewed Otto as a professional who advocates for all students and who encouraged students to be their best,” said Suzette Stille, Dean of Admissions at College of Charleston. “He was always willing to share his energy and passion for higher education and advocate strongly for access and diversity. He has often shared his path to the College of Charleston in order to encourage others to have appreciation for their opportunity to be here.”

On the lighter side of things, former student athletic trainer and Director of Sports Medicine Michelle Futrell, who now serves as Director of the Center for Academic Performance & Persistence on campus, remembers having to adjust the temperature of the gym by “just two degrees” for Kresse’s practices with the Physical Plant. It was the small details that resulted in the program’s success.

“Coach will always just be Coach,” she said. “He doesn’t even need a last name. His practices were always planned down to the minute and we rarely deviated from that schedule. His ability to take good players, not superstars, and motivate them to practice and play at a high intensity allowed us to upset many ‘giants’ in his tenure.”

Futrell and her husband, Jamie, the head women’s golf coach at College of Charleston, have two children – both who have grown up around CofC Athletics. Like the Futrell’s, Kresse and German have served as role models to many of the families and children of those families that have been a part of the athletics department over the years.

“Mr. German is a fixture on this campus and a true trailblazer,” Futrell said. “I am honored to have had the opportunity to work with him. Heis one of the most genuine and caring people I have ever met, but he could also bring discipline and tough love when a student-athlete needed that approach.”

Many on campus also share the same sentiments of athletics department staffers about the impact Kresse and German have had at CofC.

“Otto’s work ethic, professionalism and knowledge he provides for CofC Athletics is exemplary,” said Robert Kersey, Director of Systems Management& Development for the Office of Financial Aid and Veterans Affairs, who has worked with German for close to 27 years. “As a great friend, Otto is a remarkable man and a true gentleman.”

Some of Kersey’s favorite stories go back to when German was a student-athlete at College of Charleston when Fred Daniels was the head coach and Remus Harper was his teammate.

“There were stories where were laughed so hard it hurt,” he said. “But most of all, I’m awestricken by the challenges that existed back then(in the 70’s), and the perseverance all three found in their hearts to excel in the way they did. They had passion for the game and passion for CofC.”

Long-time sports information director and former Voice of the Cougars Tony Ciuffo also provided much insight into the legacy of what Kresse and German leave behind in retirement.

“Otto helped build the College of Charleston’s foundation as a student-athlete and later as an administrator in the admissions office and athletics department,” said Ciuffo, who worked at CofC from 1990 to 2010. “He represents everything that’s great about the school and has been a mentor to many. The College will never replace a man like Otto. We will never forget the sacrifices he made both personally and professionally to help make the school a centerpiece of our great city. Otto has touched more lives than he will ever know. We should all strive to be like Otto German.”

In addition to the endless great wins, upsets and College of Charleston earning a spot in the national rankings, the one moment that will be forever ingrained in Ciuffo’s and Wiedeke’s mind about Kresse is the time he led cheers at Arizona’s, a former restaurant located downtown, when the Cougars earned an at-large bid to the NCAA Tournament in 1994.

“We should all thank John for what he did for College of Charleston Athletics,” he said. “His success as the Cougars’ head coach was the reason the school moved to NCAA Division I status. That move changed the path for many including myself. I spent 20 wonderful years at College of Charleston. What made the position so appealing was the success the basketball program achieved under John and the school’s move to Division I. Because of John’s success, other great coaches in other sports have come aboard and led the Cougars to unmatched heights. But, it all began with our Coach K. I tip my cap to both of these wonderful men who have meant so much to me and somany others.”

As a chapter of history closes at the College of Charleston, Kresse and German will be forever missed and these countless stories will be continued to be told.