As Long As “Hazel Nuts” Appreciate New Music & Live Shows, The Band Will Rock On! 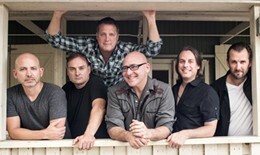 25 years after they first formed in Gainesville, Florida Sister Hazel continue to be one of the most durable pop rock bands to emerge from the 1990’s. Their sophomore release ‘Somewhere More Familiar’ (1997) garnered the band a platinum (1 million units) selling disc, and delivered their highest charting single ‘All For You‘. The track rose to #11 on the pop charts, reaching all the way to #1 on the Adult Contemporary charts. The follow up album, ‘Fortress’ (2000) would earn them gold certification.

Over a ten year period the AC charts would provide them with five additional singles inside the Top 40 with ‘Change Your Mind’ reaching #5 and ‘Champagne High’ settling in at #22. Sister Hazel are nothing but consistent. The five, and often member unit have been together for over two decades, and continue to draw huge crowds each and every year they tour. Their staunch supporters happily wear the title of Hazel Nuts.

According to long time drummer Mark Trojanowski taking control over the direction of the band, is what keeps their followers excited about Sister Hazel. “I think we connected with our fanbase early on, and really wanted to deliver music to them on a consistent basis, and not so much as the record label dictated. That has helped the band gain continued support.”

Establishing their own rhythm was important to the guys. “A lot of bands back then would put out an album, go on tour, take six months off and then maybe go back in the studio to record. We certainly enjoy playing live but didn’t necessarily want to follow the same pattern. After our first big release (Somewhere More Familiar) we went out on the road, playing 200 plus dates a year.”

He adds, “Certainly having that kind of success and busier schedule was new to us. Even when we finished our initial tour the label wanted us to go right back out with a well known band. We were interested in putting out new music. We’ve always enjoyed the creative aspect in the band, and quite frankly we thought it took our record label way to long to deliver a follow up album for our fans. Somewhere along that process we decided it was better to be independent.”

How would Trojanowski describe typical Hazel Nut fans. “I’m not sure they are typical. One thing for certain is a Hazel Nut loves music, not just Sister Hazel music but all genres of music. We (the band) have evolved over the years. We all come from different backgrounds and enjoy different types of music and that reflects in our songs. Hazel Nuts would no doubt be lovers of Indie music as well.”

Since 2003 Sister Hazel has released six studio albums including ‘Lighter In the Dark’ (2016) which has a decidedly country music sound. “It was just the natural progression of the band. It is a very honest album from Sister Hazel. We are heavily influenced by all types of music, but we’ve always wanted to stay true to ourselves, and where we are at a particular time.”

Until ‘Lighter In the Dark’ was released the guys hadn’t put out an album in six years. “That was a long break for us, and we felt it, and I think our fans did as well.”

Since 2016 the band has released four EPs. “‘Lighter In the Dark’ took longer than we thought. Right after it came out we went through a management change, as well as a new booking manager. We didn’t want to go through that kind of drought again, so we decided we could release EPs and give our fans more music to satisfy their interest.”

The EPs have all found success with country and indie music lovers, with ‘Water’ (2018) rising as high as #9 on Billboards Country Charts and #2 on their Indie Charts. “The beauty of what we do is that it reaches across so many types of genres.” Trojanowski says releasing the EPs has been to some degree easy. “Often times we have songs left over, or that have been sitting around for a while, so we re-visit them and put them out.”

Sister Hazel may have rolled with the times, but Trojanowski admits the current state of the music industry doesn’t sit well with him. “A lot of music fans today are single driven. I don’t think we’re interested in having the next big ‘got to have’ hit. We like what we are doing, and putting out music the way we do, for the Hazel Nut generation. It’s been working for us for over 20 years.”

Because the band genuinely care about each other, and forgo egos they have maintained their core lineup since 1993. “We all have outside interests and families, but the band is our center. I like to say it’s the ‘mother ship’. We schedule what we do around what takes precedence with the other members.”

Sister Hazel have brought their weekend Hazel Nut Hang to the world famous Windjammer every summer for as long as fans can remember. This year they had to tweak the dates due to one of life’s treasured moments. “Ken (Block) has a kid graduating this year, so that’s not something he could miss. Everyone’s family comes first, and then the band.”

Before they were a household name Sister Hazel began performing at the Windjammer. “There are several iconic music clubs in the southeast and the Windjammer is among the best. It’s one of the clubs we wanted to play for some time but it just didn’t work out. I think last minute there was an opening, and Bobby Ross added us to a show. We opened for Cravin’ Melon many years ago. That began our longtime relationship with the Windjammer and Bobby.”

Trojanowski adds in detail, “Guys like Bobby Ross are rare in the industry, especially today. Bobby is one of those club promoters who really loves music and showcasing artists from various backgrounds. To this day all the members of the band consider Bobby a very close friend.”

Sister Hazel took their name from Sister Hazel Williams, a local missionary who ran a homeless shelter in Gainesville. Over the years the band has lent their time, talents, and monies to help promote several worthwhile causes near their hometown. The guys have participated in Hootie & the Blowfish’ annual Monday After the Masters Celebrity Golf Tournament almost since day one. “Those guys (Hootie) hit around the same time we did. They are from the south, and played the same clubs we did. We’ve been friends for a long time, and we love what they do.”

Since 2001 Sister Hazel has been one of the founding members of the ‘Rock Boat’, an annual rock music-themed “floating music festival at sea” aboard a cruise ship. It takes place in different locations each cruise, departing from Florida, with many bands celebrating several genres taking part. “We love doing it, and it’s become a big part of who we are. It’s been especially awesome for the fans.”

Sister Hazel partnered with Carnival nearly two decades ago to jumpstart ‘Rock Boat’. The cruise and the show have grown over the years, with bands lining up to take part. “It sort of celebrates some of the bands we come to know over the years on tour, like Zac Brown Band, Tonic, Collective Soul, Will Hoge, Needtobreathe, and Cowboy Mouth. That’s just a small list, we have dozens of bands who have taken part covering pop, Americana, alternative, bluegrass, country, and some really cool jam bands. Everyone has a blast. It’s one of the highlights of the year for me.” The 2020 Rock Boat cruise sets sail January 24th from Miami. For more visit, http://www.therockboat.com/ 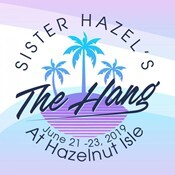 Lowcountry fans will have to get their fill of Sister Hazel during the weekend of June 21st when they bring their Hazel Nut Hang to the Windjammer Friday through Sunday. “Looking forward to it. We’ve made good friends in Charleston over the years. It’s always nice to get back there and support the Windjammer and Bobby. The Jammer has a special place in our history, and hopefully we’ll be playing there for many more years.”

More than a quarter century from when they first started the band, where does Mark Trojanowski see the longevity of Sister Hazel. “We’re a tight knit group, very close. We love performing and recording music. As long as we have fans out there willing to support us, come out to our shows, and appreciate new music from us, I think we’ll keep at it. All at our own pace.”