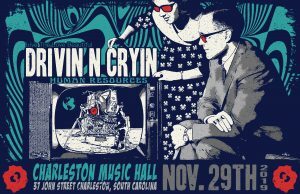 The band is celebrating their 33rd year together. During that time they have tallied a gold record, released 10 full-length albums, and had a documentary made about them. In 2015, they were inducted into the Georgia Music Hall of Fame.

Human Resources (HR) is an American indie-pop band from Charleston that formed in 2015. The band’s debut single “Queen” and the subsequent LP En Route (2015) were released to positive local reviews, earning traction on Spotify and other streaming services. The debut played a key role in earning the “Electronic/Experimental Band of the Year” award from the Charleston City Paper. The follow-up album Pizza Dreams (2016) also did well and helped earn the band a second consecutive City Paper Award.

“Drink the Plank” Saturday at the Charleston RumFest