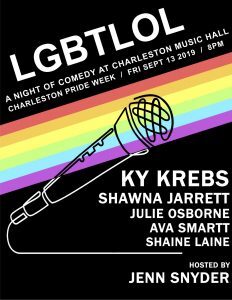 The Charleston Music Hall and Charleston Pride are once again partnering to host “LGBTLOL: A Night of Comedy” on Friday, September 13th at 8 pm. The show is a great way to kick off Pride Weekend.

The event showcases LGBTQ comedy in the south and includes comedians from Austin, Atlanta, Charlotte, Columbia, and the Holy City. Individual tickets are $15, but Charleston Pride members are offered discounted $10 tickets. A dinner add-on option is available for an additional $32. Tickets are on sale now!