Lockridge and Smith have combined to blast 14 of Charleston’s 52 home runs this season, the third-most in the South Atlantic League this season. 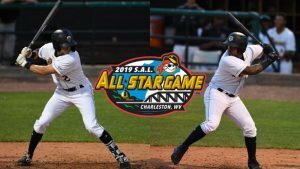 A late addition to the All-Star roster, Lockridge got off to a slow start through the first couple of weeks, a likely reason behind his original omission from the roster, before turning a corner as one of the most effective leadoff hitters in the circuit. After batting just .169 (13-for-77) through his first 19 games, the Troy product turned it around starting in May, batting .303 in 36 games since the turn of the calendar page. His nine home runs lead the team after he hit just one long ball in his professional debut season in 2018, and his six homers leading off an inning leave him tied with Onil Pena for the most in the SAL. His .912 OPS is good for 7th-best in the SAL since the beginning of May as well.

Smith has blasted five home runs while posting numbers as one of the top pure hitters in the SAL this year. The Rockwall, TX native has hit .313 with an OPS of .892, both marks that lead the RiverDogs and rank among the top-six qualifiers in the league. The 20-year-old was named the All-Star starter in left field for the Southern Division. The former fourth-round pick has also been one of the league’s hottest hitters; his .336 (48-for-143) average since the start of May is the third best in the circuit. Smith might look to add some loft to his swing for the derby; his over 30 percent line drive rate is the best in the league according to Fangraphs.

With just a half-game lead on second place Lexington, the RiverDogs (34-30) continue a crucial three-game road trip on Tuesday night in Rome. All-Star right-hander Alexander Vizcaino (3-2, 3.16) gets the ball for Charleston, who look to snap a two-game skid. Fans can catch the game on WTMA 1250 AM in the tri-county area and online streaming on the RiverDogs’ TuneIn radio station. First pitch is at 7 p.m.