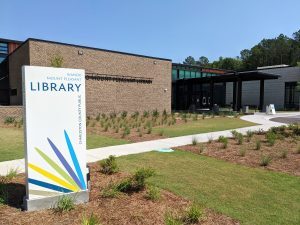 “We are thrilled with this example of library innovation and accessibility for all of Charleston County’s residents,” CCPL Executive Director Angela Craig said. “This is one of many new facilities launching system-wide that will provide exceptional library service, as well as access to emerging technologies and resources that the public can embrace as their own.”

This facility is the first of five new libraries to open after the passing of a 2014 $108.5 million referendum calling for new facilities and the renovation and update of the existing branches. The referendum was approved by 74% of Charleston County voters.

“The new Wando Mount Pleasant Library represents the first of five new chapters for lifelong learning for thousands of people in Charleston County,” CCPL Board of Trustees Chair Andy Brack said. “We’re thrilled with the beauty and capacities of the new building. But what’s even more exciting is the learning, collaboration and energy that will grow year after year within these walls.”

The new branch was designed by architecture firm LS3P and built by MB Kahn. Carolina Park Development donated the land for the facility, along with $1.2 million toward its construction.

Construction of the 40,000 square-foot facility began in December 2017. Features include:

For more information about this library branch and updates on the construction of the other facilities, please visit ccpl.org/construction.

Follow us
Related Topics:charleston county public libraryWando Library
Up Next

Report: South Carolina Ranks in the Top 20 Most Fun States in America