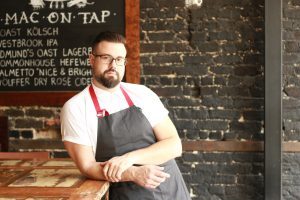 The Macintosh, partner Jeremiah Bacon, and the rest of the culinary team on Monday announced the appointment of Stuart “Stu” Rogers to the role of executive chef. His debut brings a fresh take on the restaurant’s menu as the concept nears its 10th anniversary.

Chef Rogers most recently served as executive chef at the group’s Oak Steakhouse location in Atlanta. Prior to joining The Indigo Road company, he worked at The Optimist, a Ford Fry Restaurant in Atlanta, and Aria Restaurant, an award-winning establishment also in Atlanta.

“Stu has been a part of our family for several years and after months in the kitchen with Jeremiah, we’re excited to formally announce his new role,” Steve Palmer, Indigo Road managing partner, said. “Stu is full of talent with a strong commitment and passion for the industry and his team. He’s done some incredible work during his time with us in Atlanta. Staying true to our company’s philosophy of promoting talent from within, The Macintosh is a perfect fit for him to express his creativity.”

The Macintosh’s new menu is slated to debut in stages this month. For reservations, call 843-789-4299 or visit the restaurant on OpenTable.

City of Charleston to Activate PSOC Due to Severe Weather Forecast