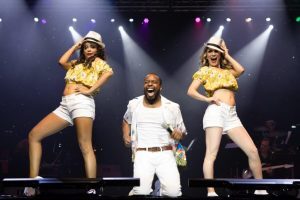 Longtime Charleston producers and entertainers Brad and Jennifer Moranz have gathered a talented cast of musicians, singers, and dancers for an all-new show this summer. The Charleston Variety Show runs for three performances July 20th to 21st at the Charleston Music Hall.

Returning to the show are baritone Matthew Billman and Kindred Moore, who will perform “Rewrite the Stars” from The Greatest Showman and Crystal Garrett who will perform “Never Enough,” another song from the popular movie.

Another musical favorite from the movie A Star is Born will be part of this year’s show. Jenna Flaherty will sing “Shallow,” the award-winning song by Lady Gaga and Bradley Cooper and she’ll showcase her operatic talents singing “Think of Me” from The Phantom of the Opera. A staple in each Moranz Entertainment production is Tiffany Parker, who will perform “She Used to Be Mine” from the Broadway musical Waitress.

Two new performers are sure to delight audiences. Michelle Rogers “sounds like she walked in here straight from Nashville,” Brad Moranz said. She will sing country classics “Why Haven’t I Heard from You?” by Reba McEntire and “Last Name” by Carrie Underwood. Kyle Lacy is a Brian Setzer-style rockabilly singer sure to have everyone grooving in their seats.

Plus, there will be a medley of Elton John classics, and violinist James Anderson will delight the audience with the Charlie Daniels version of “Orange Blossom Special.”

Of course, no Moranz Entertainment show is complete without comedy sketches and dance numbers featuring Brad and Jennifer Moranz.
“We have so much talent on stage, it’s remarkable,” Moranz said. “There’s no other show like this in Charleston. And even if you’ve been to our shows before, this one is entirely new and unlike anything you’ve seen before.”
Shows are 2 pm and 7 pm on Saturday, July 20th and at 3 pm on Sunday, July 21st. Tickets are $39 for adults; $36 for seniors (age 62 and up) and military; $22 for students 21 and under; $19 for children 12 and under. For groups of 15 or more, tickets are $34 each.
Tickets are on sale at www.CharlestonMusicHall.com or by calling 843-853-2252 (Box Office hours are 10 am to 3 pm Monday through Friday).

Follow us
Related Topics:brad and jennifer moranzcharleston music hall
Up Next