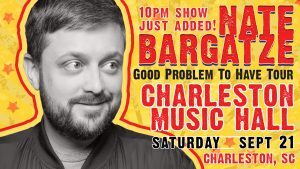 The Charleston Music Hall and National Shows 2 announced a second Nate Bargatze show on Saturday, September 21st at 10 pm. The first show will be held on the same evening at 8 pm. Tickets for both shows are on sale now and include a dinner & show option.

Comedian, actor, and writer Nate Bargatze is on tour following the release of his latest stand-up comedy special, The Tennessee Kid, which is now streaming globally on Netflix.

Bargatze’s comedy is both clean and relatable, evident in his six appearances on The Tonight Show Starring Jimmy Fallon following four appearances on Late Night with Jimmy Fallon. He appeared on Conan four times, was a recurring guest on @midnight, and had his own Comedy Central Presents in 2011.

For more information on Nate Bargatze, including tour dates and tickets, visit www.natebargatze.com
–

Follow us
Related Topics:charleston music hallNate Bargatze
Up Next