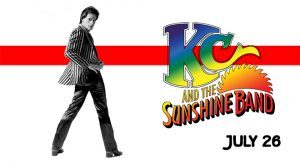 KC and the Sunshine Band are coming to the North Charleston Performing Arts Center on July 26th. Tickets are available for purchase now.

KC and the Sunshine Band first appeared on the music scene 40 years ago, but the group is still quite popular today. Harry Wayne Casey – KC for short – developed a unique fusion of R&B and funk that gave us an impressive string of hits like “Get Down Tonight,” “That’s The Way (I Like It)” and “Shake Your Booty”. With sales of over 100 million records, nine Grammy nominations, three Grammy Awards, and an American Music Award, KC and the Sunshine Band was one of the most progressive bands of the 70’s and is credited with changing the sound of modern pop music.

Tickets can be purchased online, at the North Charleston Coliseum box office, and Ticketmaster.
–

Follow us
Related Topics:KC and the Sunshine Bandnorth charleston performing arts center
Up Next