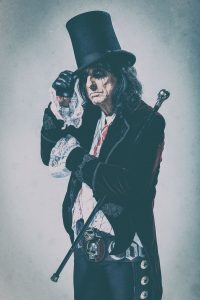 On Thursday, November 14th, the North Charleston Performing Arts Center will host An Evening with Alice Cooper starting at 7:30 pm. Tickets go on sale at 10 am on Friday, June 7th.

Cooper is a singer and songwriter whose career has spanned over 50 years. He pioneered a theatrical brand of hard rock that was designed to shock. Drawing equally from horror movies, vaudeville, and garage rock, Cooper and his group created a stage show that featured electric chairs, guillotines, fake blood, and boa constrictors.

There is little that Alice Cooper hasn’t achieved during his impressive career. He’s sold-out numerous tours and six of his studio albums have achieved platinum status in the United States, while three others have achieved gold. In 2011, the original Alice Cooper band was inducted into the Rock and Roll Hall of Fame.

Plus, “Nights With Alice Cooper,” Alice’s nightly radio show, continues to air in nearly 100 cities in the USA, Canada, Australia, and the UK. The five-hour long show features his favorite classic rock songs along with his insider anecdotes about many of the artists.

“How Did This Get Made – Live!” Coming to the Gaillard Center Next Month