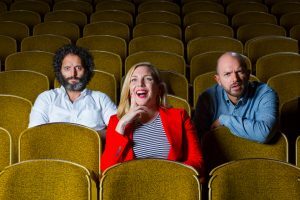 The Charleston Gaillard Center presents How Did This Get Made – Live! on Thursday, July 18th, 2019.
Have you ever seen a movie so bad, it’s good? Paul Scheer (The League, Black Monday), Jason Mantzoukas (The League, Brooklyn 99) and June Diane Raphael (Grace & Frankie, Long Shot) are experts in the best of the worst of cinema. On the award-winning podcast How Did This Get Made, they gather their funniest friends and subject themselves to a cinematic nightmare – and then podcast the results.
With over 200 plus episodes, past guests have included Charlize Theron, Seth Rogen, Conan O’Brien, Danielle Radcliffe, Kumail Nanjani, Adam Scott, Topher Grace, Amy Schumer, Natasha Lyonne, Nick Kroll, Patton Oswalt, Phoebe Robinson, Alison Brie, Illana Glazer, Abbi Jacobson, Ike Barinholtz, Casey Wilson, Hannibal Buress, Chelsea Peretti, Pete Davidson, and many more.
Each episode features the deconstruction and mockery of horribly bad films like: Surf Ninjas, XXX: Return of Xander Cage, Shanghai Surprise, The Room, and the entire Fast and Furious franchise.
How Did This Get Made live episodes feature audience participation through questions to the hosts, which creates impromptu songs for segments, and one-of-a-kind clips.
How Did This Get Made won a 2019 Webby Award for Best Comedy Podcast. It has also been voted “The Best Comedy Podcast” by LA Weekly, one of Vogue’s “Best Podcasts to Listen to Now,” one of TIME Magazine’s “50 Best Podcasts,” one of Entertainment Weekly’s “15 Podcasts That Will Give You a Break From Reality,” one of Vulture’s “Funny and Fascinating Pod-casts,” one of Backstage’s “Podcasts to Inspire and Entertain You,” as well as being listed as one of the “Top Film Podcasts” in The Washington Post, and is consistently one of the Top 10 most downloaded comedy podcasts.
Tickets go on sale Friday, June 7th at 10 am. Get pre-sale access by becoming a Charleston Gaillard Center Member. Contact the Development Office at development@gaillardcenter.org or (843) 579-6452 for more information.
Here’s info on each of the hosts:
Paul Scheer is most known as a star of the Showtime series, Black Monday, alongside Don Cheadle. He was one of the stars of the long running FX series The League, as well as the co-creator and one of the stars of the cult MTV sketch series, Human Giant, as well as the Adult Swim action-comedy series NTSF:SD:SUV::. He won a SAG award for his work on the HBO comedy, Veep, and frequently appears in the ABC sitcom Fresh Off The Boat and Hulu’s Future Man. He recently appeared in The Disaster Artist with James Franco and The Long Shot with Seth Rogen and Charlize Theron. Scheer also hosts another popular movie podcast, Unspooled, with film critic Amy Nicholson, celebrating the best in cinema.
Jason Mantzoukas most recently starred in The Long Dumb Road, an American road trip comedy that premiered at the 2018 Sundance Film Festival and costars Tony Revolori, Casey Wilson, and Ron Livingston. Mantzoukas can also be seen as Frank in The House, Nadal in The Dictator, and in films like How To Be Single, Sleeping With Other People, Neighbors, and the upcoming John Wick 3. On television, Mantzoukas is best known for roles like Rafi on FXX’s The League, Jay on Netflix’s Big Mouth, Adrian Pimento on FOX/NBC’s Brooklyn Nine-Nine, and Derek on NBC’s The Good Place, as well as shows including I’m Sorry, Kroll Show, Modern Family, Transparent, Broad City, Parks and Recreation, Enlightened, and Community. In addition to his acting work, Mantzoukas co-wrote Adult Swim specials Mr. Neighbor’s House (1&2), as well as the Universal comedy Ride Along starring Ice Cube and Kevin Hart.
June Diane Raphael is an actress, comedian, screenwriter, and producer. Currently, Raphael co-stars in the hit Netflix series Grace and Frankie as Brianna, Jane Fonda’s bold entrepreneurial daughter, which premiered its fifth season this past January. She can currently be seen opposite Charlize Theron and Seth Rogen in Lionsgate’s Long Shot, which premiered May 3rd. In addition, she is co-authoring a book to help women get into politics titled, The Woman’s Guide to Running for Office and Changing the World, which will be released September 3rd. She has also appeared in films including The Disaster Artist, Blockers, Zodiac, Bachelorette, Forgetting Sarah Marshall, and Anchorman 2: The Legend Continues. Additionally, she co-founded The Jane Club, a shared workspace for women in Los Angeles. The workspace is the only of its kind to offer professional, on-site childcare for working mothers.

Alice Cooper to Perform at the North Charleston PAC this Fall