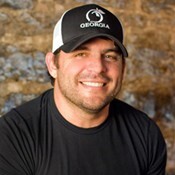 One could argue that between 1994 and 1999 Rhett Akins was one of the biggest names in country music. In the same time frame that gave us Garth Brooks, Alan Jackson, Tim McGraw, and Brooks & Dunn among others, Akins placed 11 songs on the Billboard Country Music charts, including six among the Top 40, two inside the Top Five, with ‘Don’t Get Me Started’ reaching the top spot in 1996. A year earlier his ‘That Ain’t My Truck‘ peaked at number three, spending 21 weeks on the charts.

All total, he’s had 14 songs make the country charts. Not a bad resume for a entertainer who realized his strengths lied elsewhere. Since the early 2000’s Akins has concentrated more on songwriting than putting out his own material. “I found out I wanted to be a songwriter more than I did an artist. I enjoyed my time in the so called spotlight, but it really wasn’t me.”

A Valdosta, Georgia native, Akins admits he sort of stumbled into the business. “I’ve always been a fan of country music and the stories great songs tell.” He got his first taste of performing in a theme park show aptly titled ‘Music Country Music’. “I was working at Fiesta Texas in San Antonio, and they invited some of us to sing at the Grand Old Opry. So they end up flying us to Nashville. I couldn’t turn that down.” He would move his young family there, which included two year old Thomas Rhett, one of country music’s biggest stars today. Akins would add a daughter to the family in 1993.

With no real job opportunities in Nashville he went to work for Opryland, a former country music theme park owned by the same group out of San Antonio. “It was fun. Sadly Opryland is a shopping center today.” As many up and comers do in Music City, he began to sing demos which lead to him signing with Decca Records in 1993. “I was 23 at the time. It seemed the way I wanted to go.” 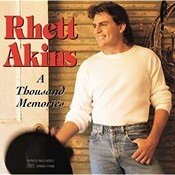 While his first two singles stalled inside the Top 30, it was his third single off ‘A Thousand Memories’, ‘That Ain’t My Truck’ that put him on the map. “It got a little crazier after that song broke. Before I knew it I was being pulled here and there. I was on Letterman and went out on tour with Reba McEntire. I can remember being out on tour and Thomas Rhett was about six year old. He loved to watch me perform, and even join me on stage.” Akins loves when fans share old photos from past shows where Thomas was out on stage. “He was a ham from the beginning. He’d even sign autographs back then.”

By the turn of the century Akins put his own career on hold to return to his first love of songwriting. “It’s really where my strengths lie.” For more than a decade his songs have been recorded by the who’s who of country music including Brooks & Dunn, Blake Shelton, Joe Nichols, as well as chart toppers ‘Tonight Looks Good On You’ by Jason Aldean, and Luke Bryan’s ‘I Don’t Want This Night to End’. In fact Akins has helped pen 29 number one hits by other artists. “I do enjoy seeing someone take my songs and make it their own.”

Writing is in Akins wheelhouse and he treats it like a job. “It’s what I do. Most days I spend 10:30 to 5pm writing songs. I know long before I’m sitting down, who I writing with that day. My schedule might be booked months ahead of time. I write with artists and other songwriters. I enjoy it much more than performing.”

To keep his mind focused he writes mainly away from home. “I don’t like to be distracted. I’m sort of a workhorse when it comes to writing. Usually I write inside a publishing office, but I’ve written many songs on a tour bus, or just out on the road.” He hasn’t released a new album since 2005. “I don’t miss it. I love what I’m doing. I’ve performed a time or two in recent years but not like I did over twenty years ago.”

If Akins were to put out new material he’d do so at his own pace. “It’s not something I think about. Even this past week a producer came up to me, and asked if I wanted to record. I politely said no. I love recording demos. If I wanted to put out new songs from me, I’d probably do it through some sort of online medium.”

He hangs mostly with other singer songwriters and straight up songwriters in Nashville. “We’ll play corporate events or songwriting showcases, like at the Bluebird Cafe. Finding artists who are the right fit for songs I write is both challenging and fun.” 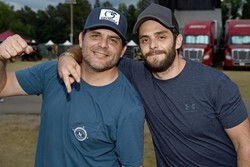 Over the past seven years he’s watched his son Thomas Rhett become one of Nashville’s main draws. With 17 singles to his credit, young Thomas Rhett Akins Jr. has topped the charts 12 times. Akins is a proud father. “It’s fun watching all his success and how he’s handled it so well. Every parent wants their kid to do achieve better than they did. I’d say Thomas Rhett has done that. He’s handled success way better than I did when it was thrust upon me in my twenties.”

All the hoopla that surrounds his son is one of the reasons Akins took a backseat to recording and performing. “His (Thomas) schedule is crazy. A photo shoot here, a video shoot there, and then it’s time for an interview. They’ll fly him out for one day to commit to a schedule demand, and right back the following day. It’s non stop at his level.”

Akins admits Thomas Rhett handles the pressure well. “He’s got great management and tour people working for him. He’s well covered.” Does young Thomas ask advice from his dad. “Early on he did, but things have changed in the industry over the years, and as long as his people have his best interest in mind, than I don’t need to chime in.”

Thomas Rhett does like to bend his father’s ear on matters closer to the heart. “We mainly talk about songs. He’ll ask if a certain song is right for him, or if this one would make a good single. He trusts my opinion.” Akins admits the two are close and young Akins likes to vent at the end of the day. “He’ll call me and say I just played Detroit and the crowd wasn’t as big as we expected. I just have to remind him the industry is full of ups and downs, and that he needs to be thankful he’s doing what he loves for a living. Thankfully he’s very centered in life.” 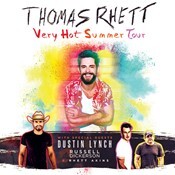 Akins has dusted off his touring boots recently, opening for his son on ‘The Very Hot Summer Tour’. “They had someone bail from the tour and needed another artist to fill in. I kind of halfheartedly said ‘might as well let me play’. I wasn’t fully serious, but before I knew it I committed and we hit the road. We’ve only done two gigs so far but they’ve been outside in 90 degree heat. That’s rough. Can’t wait until we play inside. But it’s been fun getting out there again.”

Dustin Lynch and Russell Dickerson are slated for the summer tour as well. Does Akins find it odd that he’s opening for his son. “Not at all. Sometimes I enjoy telling the crowd I’m Thomas’ dad. They get a big kick out of that, and frankly so do I.”

Rhett Akins and Thomas Rhett will take part in the 2019 Carolina Country Music Festival in Myrtle Beach June 6-9th. Thomas Rhett is headlining the show on Sunday night with his father playing late in the afternoon. “I’m sure it will be when it’s the hottest time of the day. That’s the south during the month of June.” 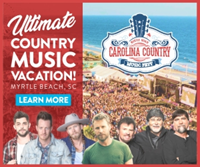 Akins will have a full hour to play during the festival which allows him to mix it up. “I’ll play my hits, but I like to add in songs I’ve written for other artists. There’s always those country music fans in the crowd who say who is this, then I’ll tell them I’m Thomas’ dad and play them one of their favorite songs from Jason Aldean. Oh yeah, I helped write that song. So maybe when they go to the merchandise table, they’ll buy something from me. Either way my life is blessed and I’m having fun. What more could I ask for.” For full lineup at the CCMF visit, https://carolinacountrymusicfest.com/