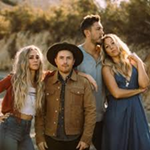 Although they might be one of the latest additions to country music, each member of Gone West bring over a decade of music to the band, and not all of it traditional country. Perhaps the most notable is pop singer Colbie Caillat who emerged on the scene back in 2007 with her debut album ‘Coco’ which yielded her two Top 20 hits, ‘Bubbly’ and ‘Realize’.

The remaining members of Gone West consist of Caillat’s fiancé and long time travelling partner Justin Young. A Hawaii native Young has been recording since 1996 with more than 10 albums to his credit. The two have been together for 10 years and engaged since 2015. Husband and wife duo Nelly Joy and Jason Reeves complete the Gone West foursome, creating some of the freshest and most acclaimed harmonies coming out of Nashville. Their self titled track is making quite a splash on the world wide web.

Caillat admits she feels more comfortable sharing the spotlight with Gone West, than she did being out front. “Most people who have followed my career know that I struggled with stage fright. Obviously it’s gotten better over time, but has really been a challenge for me. All along I thought to myself, how fun it would be to be in a band. I never imagined it would be this much fun until Justin and I partnered with Nelly and Jason.”

According to Caillat the partnership came about naturally. “We had already been touring together. They worked with me on my last album ‘The Malibu Sessions’, and we had a blast. Justin has been with me for many years, and Jason well since the beginning, helping me write songs. Jason and Nelly are like family to me. When Justin and I moved to Nashville we all started to hang out, and work together more. I think it was then we saw a glimpse of what the future held for us.” 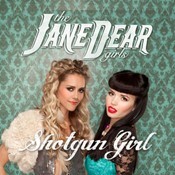 Much like Caillat, Nelly (aka Danelle Leverett) tasted success as part of the country duo The JaneDear Girls. Their self title album (2010) earned the ladies a couple of Top 40 country hits including ‘Shotgun Girl’ and ‘Wildflower’ which peaked at #15. But the twosome disbanded in 2012, after her singing partner decided to pursue a solo career, with Nelly finding ground as a songwriter. She co-wrote Big & Rich’s first big hit, ‘That’s Why I Pray’.

Nelly took it all in stride. “Things happen for a reason. I can tell you for sure I never wanted to be a solo artist. I enjoy being a part of an ensemble group. Jason and I met back in 2009, so we’ve all known each other a long time.” Nelly says forming a band was inevitable. “Absolutely, I wake up every morning and pinch myself just to make certain it’s for real. I’m in this incredible band with three beautiful people, and one just happens to be my husband. There is a whole lot of love in this band. Life is good.”

It’s the overall sound that blows Nelly away. “I was used to singing with someone else, but once we did the tour and realized how well our four part harmonies resonated from the stage and in the studio, it was amazing. Right then and there, I knew where I was meant to be.”

Gone West made their official debut on the Grand Old Opry stage. It provided a few different takes for both ladies. “It was my first time going to the Opry let alone performing” says Caillat. “The entire experience was very magical for me. We didn’t have much out there. We had shot a video and I guess they saw that. So to get an offer to play the Opry was just amazing.”

Nelly on the other hand had performed at the Opry on several occasions. “When I was in JaneDear we played their a number of times. But what was really sad is that my family never got to see any of those shows. When Gone West was asked to perform all of our families came into town to see us. It made it so much more special.”

While Caillat’s songs have been decidedly pop, she understands Gone West is born out of Nashville. “We’re definitely country. All music is a mix of lots of styles. Our sound incorporates all of our backgrounds. Justin grew up in Hawaii with steel guitar. Nelly has been country for quite some time. Jason’s been around all of it. Each of us bring someone amazing to the table.”

Their self titled debut single captures clean crisp harmonies and embodies the southern California soft rock genre from the 1970’s. Gone West could easily be compared to bands such as Fleetwood Mac, Pure Prairie League and others during that time period. Nelly says, “You can’t help but be influenced by artists who have come before you. We all love those bands and to draw any comparisons to them is indeed a great honor.”

Caillat and Nelly came to their God given talents through different approaches. Caillat’s father Ken was a journeyman record producer and engineer who worked with Fleetwood Mac on their biggest albums, including ‘Rumours’ (1977) and ‘Tusk’ (1979). “I can remember my dad being in the studio. He even had one of those huge mixing boards in our house. I was surrounded by music.”

Prior to her high school years Caillat began to take singing lessons and says Lauren Hill was one of her early inspirations. Caillat tried out for ‘American Idol’ back in 2004 and 2005 but was turned away both times, even when she sang ‘Bubbly’ for the pre-audition judges. “I wasn’t the person I am today. I was shy back then, basically an introvert.” Ironically Caillat has performed on the American Idol stage, after she became a household name. “I didn’t give up on my dream, so it all worked out the way it was supposed to be.”

Nelly’s journey took another path. A gifted athlete, an injury provided her time off and redirection. “I did a lot of sports when I was younger. I was a gymnast and enjoyed track & field. I fell and broke my wrist. During my time off I picked up a guitar and started to learn chords. So I guess you could say I literally fell into music.”

She met husband Jason while working on his 2011 album ‘The Lovesick’. The couple married in 2012 and formed the duo ‘High Dive Heart’ in 2015. “We have chemistry on and off stage. Our union was meant to be.”

The ladies approach songwriting in a similar fashion. Nelly says, “Writing for myself and writing for Gone West are two different animals. I admire Justin, Colbie, and Jason. My goal is to help bring their stories to life. Writing collectively is way more fun.”

Caillat agrees, “When I write for myself, it’s about what I’m going through. But with the band it’s an incredible process. We’ve all gone through so much, and we can each bring that to the songwriting process. I enjoy writing with this group, mainly because there’s so much talent.”

Gone West’s first single ‘What Could’ve Been’  is available digitally June 7th, and arrives to country music radio stations in mid July. “We’re excited about it. Hopefully the lyrics will really speak to listeners”, says Nelly. Caillat adds, “It’s a really good song. I think it reflects the deep rooted harmonies that we have in the band.”

Although each member of Gone West has tasted success apart from the band, Colbie and Nelly have high hopes for Gone West’s longevity. Nelly says, “We’ll take it one day at a time. I feel like we’re in a really good place right now, and I excited to see where the journey takes us.” Caillat echoes Nelly’s assessment. “We all have so much we can bring to the group, our own music and the songs we’re creating together. It’s been fun so far and hopefully it’s just the beginning for us.”

Gone West will take part at the annual Carolina Country Music Festival in Myrtle Beach (June 6-9). They will perform on Saturday June 8th. The headliners this year are Alabama, Florida Georgia Line, Thomas Rhett, and Dierks Bentley. Others on the bill include Dustin Lynch, Rhett Akins, Delta Rae, the Brothers Osborne, and Sweet Tea Trio. More than 30 acts over three full days.

Nelly says, “Our good friends ‘Dan & Shay‘ play on the same day, and Florida Georgia Line close out Saturday. I know the festival has a strong lineup. We are excited to showcase Gone West in front of a large crowd of country music lovers.” Caillat agrees, “It should be a lot of fun. With our new single coming out and playing festivals like this, it will really help get our name out and hopefully attract a bigger fan base.”

For more on Gone West visit their website at https://www.gonewestmusic.com/ and for about all that’s happening at the Carolina Country Music Festival click https://carolinacountrymusicfest.com/