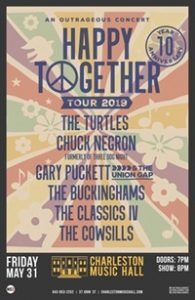 Six bands, 25 Top 40 hits, reaching back 50 plus years, with one singular goal, to take baby boomers on a musical journey back to the late 1960’s and early 1970’s. The 2019 ‘Happy Together’ tour is a wonderful trip into yesteryear, revisiting songs that lit up AM radio, that often took young listeners away from civil unrest, political uncertainty, and the Vietnam War.

For over two hours Friday night (May 31) at the historic Charleston Music Hall, concert goers enjoyed stepping back in time, dancing to familiar oldies and letting their hair down, well at least those who still have it. Not only is the ‘Happy Together’ tour aptly titled after headliners The Turtles, but it is a welcome tribute to artists and fans, who grew up together during the summer of love and the bubble gum generation, circa 1967-1972.

Among the half dozen acts taking part in the annual tour are The Cowsills, The Classics IV, The Buckinghams, Gary Puckett from the Union Gap, Chuck Negron (founding member & vocalist) with Three Dog Night, and The Turtles. 25 hit songs capturing a moment in time and providing a soundtrack to a generation. With four talented musicians accompanying each act, and a big screen backdrop recapturing images of the bands from their heydays, the ‘Happy Together’ tour is an all out blast. Add in comedy and reflection from each artist and you have two hours of pure bliss.

The Cowsills got the party started jumping right into their 1967 hit, ‘The Rain, The Park, & Other Things’, a #2 Billboard smash. With three Cowsills in tow including brothers Paul and Bob, with baby sister Susan, the trio followed with ‘Indian Lake’ (1968). They brought much laughter describing how much fun it was having mom in the band, and upon meeting the Partridge Family cast, a show patterned after the Cowsills success. After offering up the full version of ‘Love American Style’, they teased the audience before ending with their second #2 positioned hit ‘Hair’, an ideal anthem for 1969.

The Classics IV followed revisiting familiar songs such as ‘Everyday With You Girl’, ‘Spooky’, ‘Stormy’, and ‘Traces, the latter three all Top Five hits. With Tom Garrett filling in for the late Dennis Yost and paying tribute the bands most decorated voice, it was a moving celebration in song.

The Buckinghams took the stage next. Like their fellow road warriors The Buckinghams offered up their four Top 40 hits including ‘Hey Baby They’re Playing Our Song’, ‘Don’t You Care’, ‘Mercy, Mercy, Mercy’, closing with their debut chart topping single ‘Kind of a Drag’, from February of 1967. The two remaining members made light of performing on the Smothers Brothers Comedy Hour, where the producers assumed by their name they were a British band, and provided a customary Union Jack flag to help them feel at home, not knowing they were Italians from Chicago. It added a bit of humor to a already enjoyable set.

After a 15 minute pause for the cause, Gary Puckett took the stage adorned in Union Gap jacket. Incredibly fit for 76, Puckett worked the stage and engaged the audience to chime in on all his familiar choruses, as he delighted the 900 plus in attendance opening with ‘Lady Willpower’. In between pleasant exchanges and funny back stories he went full throttle into ‘This Girl Is A Women Now’, and ‘Woman, Woman’, before ending on his biggest across the board hit, ‘Young Girl’. Puckett is a seasoned showman and his mini concert proved he still has the chops.

One of the three original singers in Three Dog Night, Chuck Negron helped solidify the bands dominance on the pop charts from 1969-1974. During that span TDN had 21 consecutive Top 40 hits, including three to chart toppers. He opened with ‘Mama Told Not To Come‘, throwing in clever snippets between numbers.

He got help from the back up band on ‘Eli’s Coming’, followed by ‘One’ and ‘Celebrate’ which got everyone ‘dancing to the music’. As his time in the spotlight was ending the crowd was eager to help sing along to their most recognized song, ‘Joy To The World’. One of the biggest selling singles of all time, it finished as the Top Pop Song of 1971 by Billboard Magazine. Like Puckett, Negron is 76, and has a renewed exuberance for life, and as he exclaimed, he’s just happy to still be able to perform for audiences who appreciate timeless music.

The stage was set for The Turtles with founding member, guitarist, and songwriter Mark Volman at the helm. A natural born cut up, Volman added antics in between The Turtles hit parade recalling his time in Frank Zappa’s Mothers Of Invention. But the crowd came to hear The Turtles albeit with a little Bob Dylan twist. The Turtles first hit was a cover of Bob’s ‘It Aint Me Babe’, a Top 10 track in the summer of 1965 when Volman was still 17.

The Turtles would grace the Top 40 additionally with ‘She’d Rather Be With Me’ and ‘Elenore’, songs Volman said felt comfortable after 50 years. With Turtles vocalist Howard Kaylan sidelined due to an illness, Archies lead singer Ron Dante has filled the void, allowing the boys to send up ‘Sugar, Sugar’, easily the evenings biggest sing along song, complete with animated video playing on the big screen.

Volman coudn’t wrap his head around the fact he’d gone from performing with Zappa, to singing along to the biggest selling bubble gum hit from 1969. Dante’s track record post Archies included producing nine straight Barry Manilow albums. Energetic at 73, Dante had little trouble belting out the tours signature song, ‘Happy Together’ which turned out to be a crowd anthem, with everyone on their feet, happy to be celebrating some of the greatest pop songs of all time.

The ‘happiness’ didn’t end there, as Volman begged the question, was the crowd ready to relive the entire show again. Although it didn’t last two and a half hours, Volman did invite the acts in similar order to take the stage a second time, plowing head first into their biggest hit for 30 jam packed seconds. The Cowsills revisited ‘Hair’ with The Classics IV getting ‘Spooky’ and The Buckinghams pining ‘It’s Kind of A Drag’. Gary Puckett gave the crowd ‘Young Girl’, as Negron was overjoyed with ‘Joy To The World’, allowing the entire cast to come together on ‘Happy Together’. Talk about a six song sing-a-long. It was epic!

Rock n’ roll has been drinking from the fountain of youth since Elvis first arrived on the scene, and baby boomers haven’t given up their desire to let the younger generation, they still know how to shake their tail feathers. As long as artists from 1960’s and 70’s have the ability to entertain us, I see no reason why we can’t ‘celebrate, celebrate, dance to the music.’ Long live rock, pop, and bubble gum music.

If you enjoy great songs from a bygone era, I strongly suggest you take in the ‘Happy Together’ tour if it plays near your hometown. It’s totally euphoric without all the non prescription drugs.