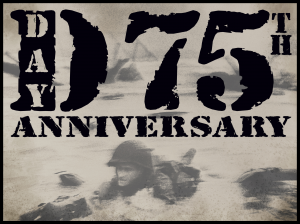 On Thursday, June 6th, Patriots Point Naval & Maritime Museum will welcome ten World War II, D-Day veterans aboard the USS Yorktown to share their memories about the invasion of France – 75 years after the battle. The program is free to attend and will begin at 10:30 am. Lt. Gen. Paul T.  Mikolashek, U.S. Army (ret.) will be the keynote speaker.

In addition to hearing first-hand accounts of the battle to take the beaches of France, the audience will also learn about the Navy destroyer USS Laffey’s role in supporting the invasion of Utah Beach on June 6th. The warship, which is on display at the museum, is one of only three D-Day Allied warships still in existence. The United States Flag that flew on the ship on June 6, 1944 has been restored by museum staff and will be unveiled for the first time during the D-Day program.

The D-Day veterans participating in the event on June 6th are all from South Carolina. Following the program, they’ll participate in a meet and greet. The USS Laffey’s D-Day flag will also be available for museum visitors to take photographs alongside.

“A few months ago, we didn’t know if we could find any men that were part of the D-Day invasion 75 years ago,” Patriots Point Naval & Maritime Museum Executive Director Mac Burdette said. “We’ve been blown away by the response to our call for help in finding these heroes. Unfortunately, this will likely be the last time most people will ever have an opportunity to meet a D-Day veteran and shake his hand. I hope the community will take advantage of this chance to thank the men who risked their lives to save the world from Nazi Germany.”

Nearly 160,000 American, British, and Canadian troops stormed the beaches of France on June 6th, 1944. In addition to manpower, 11,000 aircraft and 5,000 ships supported the operation. Following the invasion of France, the Allies fought through Europe and forced the Germans to surrender eleven months later on May 8, 1945.