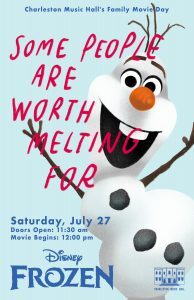 Families can escape the summer heat with a cool day at the movies thanks to the Charleston Music Hall. The venue last week announced they will host their Family Movie Day on Saturday, July 27th.


The Music Hall says they will be screening three of their favorite animated films on the venue’s full-sized movie screen. The schedule for the day can be seen below.

The bar will be open for the parents, and they will be serving popcorn, snacks, candy, and drinks for the kids. Guests that dress up as one of their favorite characters from the films we will receive a special surprise.