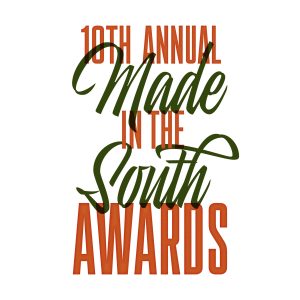 Garden & Gun recently announced the kickoff of its tenth annual Made in the South Awards with the official call for product entries in six categories: Food, Drink, Home, Style, Crafts, and Outdoors. The overall winner will receive a $10,000 cash prize and will be prominently featured alongside the other category winners and runners-up in the magazine’s December 2019/January 2020 issue.

Garden & Gun created the Made in the South Awards in 2010 to celebrate and encourage Southern craftsmanship, and to recognize the best available Southern-made products.

“Every year of the Made in the South Awards has been special, but I have a feeling our 10th will be the best yet,” David DiBenedetto, senior vice president and editor in chief of Garden & Gun, said. “Not only will we be celebrating some of our favorite past winners but also discovering a new crop of talented artisans, craftsmen, chefs, designers, and tastemakers.”

The 2019 Made in the South Awards judges are:

All Southern artisans or businesses with a product in one of the six categories (Food, Drink, Home, Style, Crafts, and Outdoors) that will be available for sale through January 2020 may apply. For entry forms, category descriptions, and rules, visit madeinthesouthawards.com. The entry fee for submissions is $75, and entries will be accepted until midnight ET on July 1, 2019. Winners will be publicly announced in the December 2019/January 2020 issue of Garden & Gun, which will hit newsstands in November 2019.

Follow us
Related Topics:garden & gun magazinemade in the south awards
Up Next