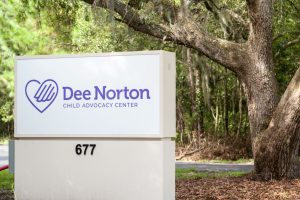 Dee Norton Child Advocacy Center, the region’s leading resource to prevent abuse, protect children, and heal families, will now have the space to serve twice as many children and families a year with the reopening of its original King Street location in July 2019.

In August 2018, the Center closed its downtown location at 1061 King Street for renovation and expansion and opened its second Center at 677 Long Point in Mt. Pleasant. With the reopening of the King Street Center, Dee Norton will now have two locations operating at full capacity, doubling its reach in the community and allowing for space to serve 3,500 children annually.

“This is a historic moment for our community,” Dr. Carole Swiecicki, Executive Director at Dee Norton, said. “I am so grateful to our board, staff, partners and supporters who have been unwavering in their belief that children can and do heal from abuse, and were unwilling to accept any abused child being turned away from needed services. Now that this expansion and two locations are a reality, no child will be turned away.”

On May 29th at 10 am, Dee Norton will host a ribbon cutting ceremony at 1061 King Street to celebrate the completion of the expansion project and to thank the community for supporting and actualizing the Center’s goal to heal twice as many children in the Lowcountry. At this time, attendees are welcome to tour the updated space. The King Street renovations include improvements to the existing building and construction of a 1,200 square foot addition.

Demographic projections show exponential growth for Charleston and Berkeley counties over the next 20 years, indicating a rising need for child advocacy services in the area. Dee Norton anticipates that the demand for its services will nearly double by 2039, which was the impetus for the King Street renovations and second location in Mount Pleasant.

The Center at King Street mirrors the design and layout of the Long Point location, which will allow children to move seamlessly between sites. Both building layouts are designed to create areas that are welcoming and safe for children, as well as increase efficiency, resulting in shorter visits. Each Center will provide all of Dee Norton’s services.

“We know that unaddressed trauma in children can result in not only short-term problems but also can lead to life-long complications,” Caroline Johnson, Co-Chair of the steering committee for Dee Norton’s fundraising campaign, said. “This community has invested in the well being of both present and future generations and shown their belief that all children deserve a chance to heal. It has been an honor to lead such an effort.”

The opening of the Center at Long Point and reopening of the Center at King Street is the culmination of Dee Norton’s fundraising effort, “Above and Beyond: The Campaign to Help Children Soar.” Through gifts and pledges, more than 224 donors supported the campaign chaired by Caroline and Harry Johnson. The Rice family made the campaign’s lead gift of $1 million. Anita Zucker, CEO of The InterTech Group, was also an early investor, gifting $500,000 to the campaign. The Center met a $500,000 challenge set by the Roper Saint Francis Physicians Endowment/Medical Society of South Carolina and received an additional $500,000 grant from the endowment upon completion. In total, Dee Norton raised $5.2 million to fund construction of the Center at Long Point and the renovation and expansion of the Center at King Street.

The King Street Center will open its doors to serve children and families starting mid-July.

Dee Norton provides an array of best-practice services to children and their families when there is a concern for child abuse or trauma exposure. Services include forensic interviews, mental health assessments, therapy services, medical examinations and case coordination. Dee Norton’s level of care is proven to be effective – more than 90 percent of children who receive therapy the Center show no clinically significant symptoms after their treatment.

Follow us
Related Topics:Dee Norton Child Advocacy Center
Up Next