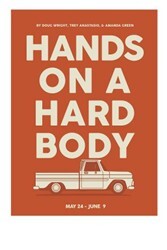 Flowertown Players end their 2018-19 play season by taking audiences to small town Texas as they present the offbeat musical ‘Hands On A Hardbody’. Based on real life events, ‘Hardbody’ chronicles 90 hours in the lives of ten down on their luck Texans, all vying to win a pickup truck if they can keep their hands on the vehicle. The last man or woman standing, and in this case touching, drive away with a brand new 1990’s Nissan truck from a dealership in Longview, Texas. Yee-haw!

An ensemble cast including ten main characters under the direction of Larry Spinner, due theatrical and often musical justice to this production based on a book by Doug Wright, Trey Anastasio, and Amanda Green. Just seven years since it made its debut in LaJolla, California before a summer run on Broadway, ‘Hardbody’ has quickly become a regional favorite primarily by virtue of its combined comedy, drama, and twangy country melodies.

Somewhere between Dallas and Shreveport a less than ethical car dealer is used to his yearly ‘Hands On A Hardbody’ competitions as a way of driving customers to his car lot. But times are tough, and even though the spectacle draws an audience and local radio coverage, it doesn’t mean increased auto sales for King Nissan.

Ten strangers aside from Benny, (a former winner with an attitude) assemble together under intense temperatures to put their tests of fortitude to work, all hoping to drive the shiny red pickup home. Among the competitors are sinners and saints, cowboys and cowgirls, those looking for love and those hoping to rekindle relationships.

‘Hardbody’ presents 10 different smaller stories, all blended together to provide one hellacious tale, with the Flowertown Players cast administering the essence of each character. Given it’s community theatre the whole is better than its individual parts, however there are a few who shine. Matthew Walker is ideally cast as Benny, a smug and bitter middle aged man looking for acceptance in all the wrong places. Does God answer prayer? In Benny’s case it’s either yes or no!

Michael Locklair and Dianne Corbin are endearing as JD (contestant) and his supporting wife Virginia. The twosome seem to reflect a couple looking to win back something more than material goods. Their ‘Alone With Me’ number is one of the highlights.

Kudos as well to Melanie Morton and Gary Hubbell as Janis (contestant) and Don Curtis. They could be trailer park trash, but their undying love for one another prove they aren’t your average country bumpkins. Jana Weber and Zach Rettig play well off each other, respectively as Kelli and Greg, two impressionable young souls discovering the ‘Hardbody’ competition is more a vehicle to jumpstart their newfound relationship.

Elissa Horrell (Heather) and Alexandria Shanko (Norma) are totally consumed in their respective roles, with Horrell nicely playing the self absorbed beauty not afraid to break the rules. Horrell shines during her first number ‘Burn That Bridge’ with Rusty Cooler, who easily dons the suit of Mike Ferris, the over extended and sleazy auto dealership general manager. Shanko delivers as the enthusiastic woman of faith, firmly believing 3000 plus prayer warriors are going to will her to victory. The ‘Joy of the Lord’ may not rest in material possessions.

It’s safe to say all the cast members embody their individual personalities. Double kudos go to Ernie Eliason for creating a magnificent set, resembling a car dealership, with easily rotating props to present the manager’s office and the showroom. Having a the truck on well oiled caster wheels makes it easy for cast members to move the two ton vehicle around the stage with precision. Patti Kelly does an equally sufficient job of dressing the cast in appropriate attire, including short shorts, western boots, and cheap suits.

‘Hands On A Hardbody’ is a modern day redneck opera, full of hope, desire, misery, and pain, wrapped in a musical comedy. Given its theatrical theme, King Nissan could just as easy be positioned on 17A in Summerville. The musical is meant to be a raucous, quirky, and absurd stage production cloaked in blue collar humor. Mission accomplished. Weekend shows run through June 9th.