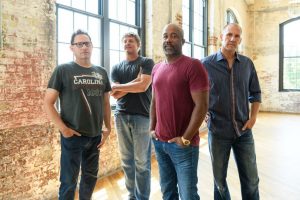 Hootie & the Blowfish on Tuesday night performed their 1994 hit song “Let Her Cry” during the season finale of The Voice. You can see the performance below.

The band, which originally formed in Columbia, is having a huge year. They will be returning to full-time touring and will release their sixth studio album. The foursome will set out on the 44-city “Group Therapy Tour” in the spring and summer of with direct support from special guests Barenaked Ladies.

Hootie & the Blowfish will also celebrate the 25th anniversary of their debut album, Cracked Rear View, on May 31st. To commemorate the anniversary, the band released a remastered version of the album with rare and previously unreleased studio and live recordings.

Billy Ray Cyrus to Perform at the HonkyTonk Saloon