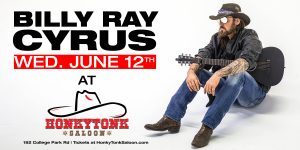 Country musician Billy Ray Cyrus is bringing The Snakedoctor Circus tour to the HonkyTonk Saloon in Ladson on Wednesday, June 12th, and tickets are on sale now.

Cyrus may be best known for his hit 1992 single “Achy Breaky Heart,” but he has had a very successful career. He is multi-platinum selling recording artist that has scored a total of eight top-ten singles on the Billboard Country Songs chart. His debut album, Some Gave All, is certified 9-time Platinum in the United States and is the only album to notch 17 consecutive weeks at number one. In his career, he has released 36 charted singles.

This year, Cyrus earned his first number-one single on the Billboard Hot 100 as a featured guest on a remix of Lil Nas X’s song “Old Town Road.”

Tickets can be purchased online here.
–

Follow us
Related Topics:Billy Ray CyrusHonkyTonk Saloon
Up Next

WATCH: Hootie & the Blowfish Perform on “The Voice” Finale