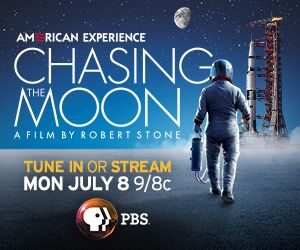 On Saturday, June 1st from noon to 4 pm, Patriots Point Naval & Maritime Museum, South Carolina ETV (SCETV), the ETV Endowment, and NASA’s South Carolina Space Grant Consortium will host “Chasing the Moon Family Afternoon.” The event is included in the price of admission to the museum and will feature space activities for the entire family aboard the USS Yorktown, the recovery ship of the Apollo 8 space capsule.

Throughout the afternoon, museum visitors will learn about the solar system, planets, and have the opportunity to view pieces of Moon rocks. A 38-minute preview of PBS’s upcoming and acclaimed six-hour documentary series Chasing the Moon will play periodically in the USS Yorktown’s theater.

“The USS Yorktown is the perfect venue to host a preview of Chasing the Moon, Patriots Point Naval & Maritime Museum Executive Director Mac Burdette said. “The aircraft carrier holds a significant role in the history of the space race and ultimate landing on the Moon because of our retrieval of the Apollo 8 capsule and crew.”

Part of PBS’ “American Experience” series, Robert Stone’s Chasing the Moon traces the space race from its earliest beginnings to the monumental achievement of the first lunar landing in 1969 and beyond. Scheduled in conjunction with the 50th anniversary of the Apollo 11 moon landing, Chasing the Moon will air in three, two-hour increments July 8th to 10th on SCETV.

“We’re excited to bring Chasing the Moon to the people of South Carolina by airing this extraordinary film in July and hosting events like ‘Chasing the Moon Family Afternoon’ across our state over the next few months,” SCETV President and CEO Anthony Padgett said. “I look forward to the discussions that will take place as a new generation learns about one of mankind’s greatest achievements of the 20th century.”

Visit www.patriotspoint.org for more information about “Chasing the Moon Family Afternoon,” and to learn more about the Patriots Point Naval & Maritime Museum.