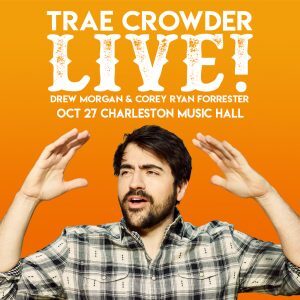 The Charleston Music Hall will host comedian Trae Crowder on Sunday, October 27th at 8 pm. Tickets go on sale to the public on Friday, May 17th at 10 am.

The comedian gained social media fame from his series of topical rants as “The Liberal Redneck”. With over 165 Million views and appearances on Nightline, MSNBC and ABC, Crowder began touring nationally as part of the wellRED comedy tour with Drew Morgan and Corey Forrester. The trio are co-authors of the best-selling book, Liberal Redneck Manifesto: Draggin Dixie Outta The Dark. The group aims to challenge stereotypes and deeply-held beliefs about what is means to grow up in the South. The trio are currently in development with a major broadcast network for a scripted sitcom series.

Follow us
Related Topics:charleston music hallTrae Crowder
Up Next