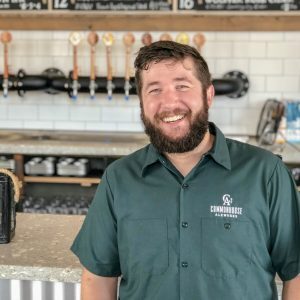 Commonhouse Aleworks on Monday announced that John McAlexander (right) joined their production team and will be assisting head brewer Shane Cummings as the production and packaging needs of the company continue to grow. McAlexander’s role will include malt handling and wort production, yeast management, quality assurance and control as well as all other aspects of the brewing process.

“Having John join our team is very exciting,” said Commonhouse co-owner Hank Hanna. “He brings a level of expertise and professionalism that will be invaluable as we continue to grow.”

McAlexander has undergraduate degrees in Biology and Chemistry from Drury University as well as a degree in Business Administration from the University of Memphis. He also received his W.B.A. International Diploma in Brewing Technology from the Siebel Institute of Technology. McAlexander has brewed professionally since 2014 at both High Cotton Brewing in Memphis TN and Signin’ River Brewing in Florence, Alabama.

In addition to providing a high level of quality control and consistency in the current portfolio of Commonhouse craft beers, McAlexander will work closely with the production team on the development of new and exciting offerings that highlight the culture and creativity that Commonhouse is known for.

Since opening in January of 2018, Commonhouse has grown to a team of over twenty people, providing an economic impact of well over a half million dollars to the community.