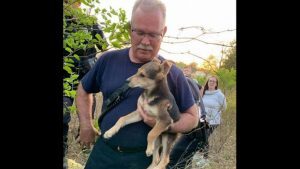 In case you missed, ABC World News Tonight with David Muir last week shared the story of the North Charleston fire captain and the puppy he saved twice.


Capt. Paul Bryant, a 34-year veteran of the North Charleston Fire Department, pulled a puppy out from under a pile of rocks back on March 30th. The dog was taken to the Charleston Animal Society and put up for adoption. When Capt. Bryant learned no one had adopted the puppy yet, he stepped in. He adopted the dog and named him Rocky.

You can see the segment below.