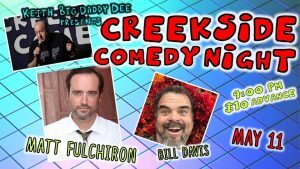 Creekside Comedy Night returns on Saturday, May 11th for another evening of hilarious stand-up. Host Keith “Big Daddy” Dee will be joined by headliner Matt Fulchiron with featured comedians Bill Davis of Charleston and Myrtle Beach’s Dennis Bellamy. The show starts at 9 pm.