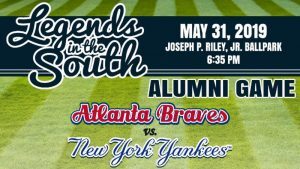 The Charleston RiverDogs today announced the Braves and Yankees rosters for the upcoming Legends in the South Alumni Game in advance of the Friday, May 31st event.
New to this year’s event, the Braves and Yankees Legends will face off in a softball game format at The Joe. Gates open at 4:35 pm for live batting practice and autographs with the first pitch of the game slated for 6:35 pm. Tickets start at just $10 and include admission to a post-game concert with Beam Country. A portion of the night’s proceeds will benefit MUSC Children’s Health.
Newcomer Dan Uggla, a former three-time All-Star second baseman, headlines the new additions to the Atlanta alumni roster as he joins past participants Ryan Klesko, Steve Avery, Charlie Liebrandt, Greg McMichael, and Jeff Treadway. Joining Uggla as first year participants for the Braves in the event will be right-hander Kris Medlen, who finished in the top-20 of the MVP voting in 2012 and won 15 games with Atlanta in 2013, along with longtime Braves catcher Eddie Perez and pitcher Chris Seelbach.
Uggla was one of the premier offensive second baseman in the game for a stretch, when he compiled five straight 30 homer seasons from 2007-11. The Louisville, Kentucky native finished his career with 235 homers over 10 Big League seasons, mostly with the Braves and Marlins.
Returning for the fourth season of the event, Klesko’s Major League career spanned 16 seasons with the Braves, Padres, and Giants. The lefty slugger finished third in the Rookie of the Year voting in 1994 and was named an All-Star in 2001 with San Diego. The California native is best known for his World Series run with the Braves in 1995, when he became the first player in history to hit a home run in three consecutive World Series games. Over his career, he hit .279 with 278 home runs and 1,564 total hits.
The Yankees Legends will once again be led by Legends in the South staples Ron Blomberg, the first designated hitter in baseball history, pitcher Ramiro Mendoza, and infielder Homer Bush. Former Yankee hurler John Montefusco, the 1975 NL Rookie of the Year with San Francisco, also makes a return to the annual event and will be joined by newcomer Carl Pavano, a right-hander who spent three of his 14 seasons in “The Show” with New York. Southpaw Dennis Rasmussen will set foot on The Joe’s field for the first time since 1997, when he served as the pitching coach for the RiverDogs in their inaugural season at Riley Park; he racked up over 800 strikeouts over a 12-year MLB career that included four seasons with the Bronx Bombers.
Playing alongside the Yankees and Braves Legends will be local Charleston-area products Drew Meyer and Chip Cannon. Meyer was a second-round draft choice out of Bishop England High School in 1999 before passing on a chance to play for the Dodgers to attend the University of South Carolina. While with the Gamecocks, Meyer became a USC Hall-of-Famer at second base and raised his draft stock even further, going in the first-round to Texas three years later; the Charleston native made five appearances with the Rangers and collected three Big League hits in 2005. Chip Cannon was a standout two-way player at The Citadel before going in the eighth round of the 2004 draft by the Blue Jays; the California native reached as high as Triple-A in Toronto’s system before being inducted into The Citadel Athletic Hall of Fame in 2013.
More participants to the game will be announced in advance of the event. Tickets are available now at rileyparkevents.com.