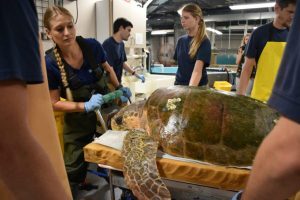 As usual, the public is invited to attend the event. Although viewing the release is free, attendees may have to pay for parking. All attendees are encouraged to represent their favorite Hogwarts House as each of the sea turtles has Harry Potter-themed named.

The South Carolina Aquarium Sea Turtle Care Center has rehabilitated and released 271 sea turtles to date; Wednesday’s release will bring the total to 274. You can learn more about the care center here.