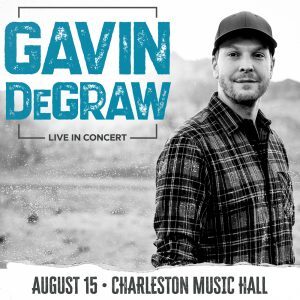 The Charleston Music Hall will present Gavin DeGraw on Thursday, August 15th at 8 pm. Tickets range from $49.50 to $75 with a dinner & show option available for an additional $32. Tickets go on sale to the public on Friday, May 3rd at 10 am.

The multi-platinum selling singer, performer, and songwriter first broke through with the 2003 release of his debut album, Chariot, which sold over 1 million copies, earned platinum certification, and yielded three hit singles: “I Don’t Want To Be,” “Follow Through,” and the title-track, “Chariot.”

Gavin’s self-titled second album debuted at No. 1 on the digital sales chart and at No. 7 on Billboard’s Top 200 album chart in 2008, earning Gavin his first Top 10 album. It spawned the hit singles “In Love With A Girl” and the gold-certified “We Belong Together.”

His third studio album, Sweeter, was released in September 2011 and produced the smash single, “Not Over You,” co-written with OneRepublic’s Ryan Tedder. The track reached #1 on the Hot AC charts, was a top 10 hit on Top 40, and was certified double platinum.

In 2013, DeGraw released his fourth studio album, Make A Move, which included the hit song “Best I Ever Had.” In addition, Gavin was nominated for his first Grammy for “We Both Know,” the song he co-wrote with Colbie Calliat for the 2013 film, “Safe Haven.”

Follow us
Related Topics:charleston music hallgavin degraw
Up Next