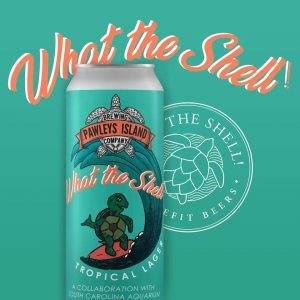 What The Shell! Tropical Lager is an American-style pilsner dry hopped with Mosaic and Callista, giving it a tropical fruit aroma up front followed by a crisp, bitter finish. The beer will be available in cans and on draft at Pawleys Island Brewing Company starting May 11th. What the Shell! Tropical Lager also will be available in select retail stores, bars, and restaurants by May 13th and will continue to be sold through sea turtle nesting season. A portion of proceeds from sales of What the Shell! always benefit the South Carolina Aquarium Sea Turtle Care Center.

The public is invited to join both the South Carolina Aquarium and Pawleys Island Brewing Company as they tap the kegs of What the Shell! Tropical Lager during the launch party on Saturday, May 11th. The event will feature live music by The V-Tones of Charleston, food from Hook’d on Smoke, as well as games and prizes.

Woodhouse Day Spa Hosting Mothers Day Event For a Cause

Red-shouldered Hawk Release Scheduled for May 1st at Brookgreen Gardens

Disney On Ice presents Let’s Celebrate will visit the North Charleston Coliseum from October 27th to 30th. Tickets are on...