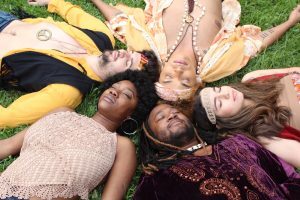 What If? Productions will celebrate the 50th anniversary of HAIR’s Broadway debut that introduced rock ‘n’ roll to the theatre stage with an epic production at the Queen Street Playhouse.

HAIR, the original tribal love-rock musical, examines a group of late 60s-era youth struggling for generational & personal identity, dealing with the Vietnam War while exploring drugs & the sexual revolution all set to a killer rock n roll score. The legendary and controversial musical, which set the tone for energetic rock music on stage, spawned a number of chart-topping hits including “Aquarius,” “Good Morning Starshine,” “Let the Sunshine In,” and of course, “Hair.”

Exploring ideas of identity, community, global responsibility and peace, HAIR remains relevant as ever as it examines what it means to be a young person in a changing world.

What If?’s production will be directed by Artistic Director Kyle Barnette and will mark the theatre company’s debut at the Queen Street Playhouse.

Follow us
Related Topics:Queen Street Playhousewhat if productions
Up Next