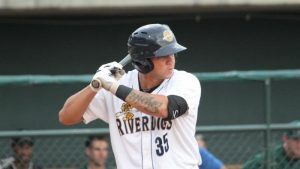 The New York Yankees today announced that catcher Gary Sánchez will be assigned to the Charleston RiverDogs on rehab assignment on Monday with the All-Star backstop scheduled to appear in the lineup with the RiverDogs in the homestand opener at Riley Park.

Sánchez, 26, appeared in 11 games to start the season with the Yankees, batting .268 (11-for-41) with six home runs and 11 RBI before being placed on the 10-day injured list with a left calf strain. He has been one of the game’s best catchers since bursting onto the scene in 2015, when he became the fastest player in Major League history to compile 19 home runs, doing so in his first 45 games in “The Show.” The Yankee slugger has since accrued 11 multi-home run games, including going deep three times on April 7th this season against the Baltimore Orioles. He is a career .252/.333/.523 hitter with 77 home runs and 196 RBI in 277 games at the Major League level.
The Dominican Republic native is a product of the Yankees system who spent parts of two seasons with the RiverDogs (2011-12), including a standout 2011 campaign when he batted .256 (77-for-301) with 17 home runs that led Charleston across 82 games and ranked fourth in the organization. His 30 career home runs in a RiverDogs uniform ranks third all-time in Charleston’s franchise history.
With Sánchez in their ranks, the RiverDogs welcome in the Kannapolis Intimidators, the Class A affiliate of the Chicago White Sox, for a three-game series to open a seven-day homestand on Monday night at Riley Park. Right-hander Alexander Vizcaino (1-0, 2.79) will make his third start of the season after fanning at least seven in his first two outings, including a career-best nine his last time out. The Intimidators are scheduled to throw righty Jonathan Stiever (0-2, 6.00). First pitch is at 7:05 p.m. For those that can’t make it to the park, catch the game on WTMA 1250 AM in the tri-county area, online streaming via the RiverDogs TuneIn Radio station, and on MiLB.tv with a subscription.
Fans can “Make Fun” with the RiverDogs all season long down at The Joe. Single-game tickets, including options to the Riley Park Club, are now available at riverdogs.com/tickets or by contacting the RiverDogs front office at 843-577-3647 (DOGS). A full schedule and list of game times for the 2019 season is available at riverdogs.com.